I met Randy in front of Penn Station, where he was talking with Cait.

I spotted what appeared to be a Chilly Willy tatoo on his inner right forearm, but he dismissed it as a youthful mistake that he eventually wanted to get covered up.

He did offer me the three stars on his right hand as a tattoo that had much more meaning: 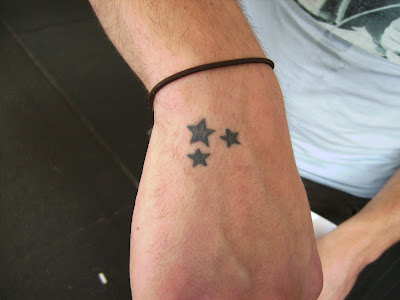 He got the three stars to remind him of youth and romance, an allusion to how kids tend to draw on themselves, often scribbling stars. The piece was inked at Lotus Tattoo in Sayville, N.Y.

He mentioned to me that Cait also had a tattoo. I asked her if she'd be willing to share, and she did. She peeled back a little of her top to reveal this beautiful piece on the top left side of her chest: 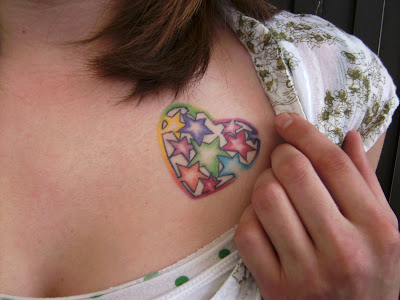 Cait and her friend Michelle have birthdays two days apart. When they turned 18, they took a design that Michelle had crafted to Da Vinci Tattoo Studio in Wantagh, New York. The artist she remembered as "Yoshi" inked matching pieces for the two. 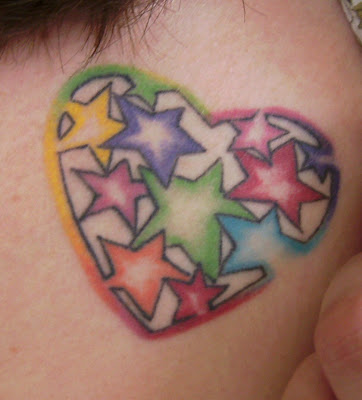 Cait says the heart that encases the colorful stars represents their friendship, and serves to remind them of the bond. In the event that life ever separates them, the tattoos will link them, no matter where they are.

Work from Da Vinci Tattoo Studio has appeared on Tattoosday before here.
Thanks to Randy and Cait for sharing their ink with us here at Tattoosday!
Posted by Tattoosday at 6:08 AM