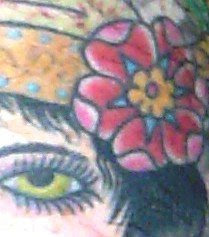 I have mentioned before that I tend to shy away from approaching subway commuters about their tattoos.

However, like most of my self-imposed guidelines, I always make exceptions for work that is transcendent. That is, if the tattoos are supremely blogworthy, I will solicit, for the sake of the reader, people on the subway. One such case presented itself last week on the Brooklyn-bound N train.

I approached Mark Turrigiano as the N emerged from the subterranean underworld and climbed the Manhattan Bridge. He has phenomenal sleeves, intricate work that wraps and surrounds the limbs.

His right arm, with an Asian-inspired theme, is mostly attributed to Elio Espana at Fly Rite Tattoo Studio (whose work has been seen previously here). His left arm hosts an incredibly huge and colorful octopus, which was inked by Lou at Third Eye Tattoo (whose work has appeared on Tattoosday here).

Because of the scale of those sleeves, we opted to go with one of his newer pieces, a gypsy on the back of his left calf: 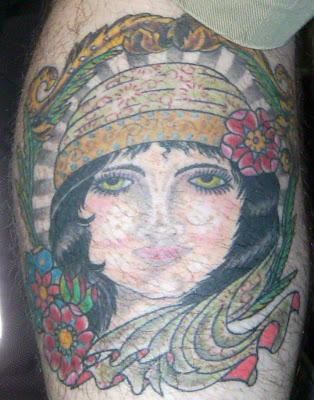 This piece, designed and inked by Craig Rodriguez at Hand of Glory Tattoo Studio in Brooklyn, is seen by Mark as "a good way to commemorate [his] work with female singer-songwriters".

I like this piece a lot because it contains a lot of traditional gypsy elements, but is atypical in its presentation. It seems much larger with greater detail than the traditional gypsy profile tattoos that are much more common. The vividness of the colors also helps the tattoo pop, and you can almost feel the texture of her scarf.

Mark says the piece was completed in about four hours over two sessions. He estimates that his body is about 30% covered in ink.

Thanks to Mark for sharing this great gypsy tattoo with us here on Tattoosday!
Posted by Tattoosday at 7:01 AM