Matt Wears His Heart (of Bacon) on His Sleeve

I first met Matt a year or so ago when he and his wife Allison opened the gourmet grocery Robicelli's in our neighborhood of Bay Ridge, Brooklyn (there's more on Robicelli's here).

It was only recently, however, when I popped in to pick up some of their incredible gourmet cupcakes (the "Irish Car Bomb" is my favorite), when I spotted this amazing tattoo on the inside of his left forearm: 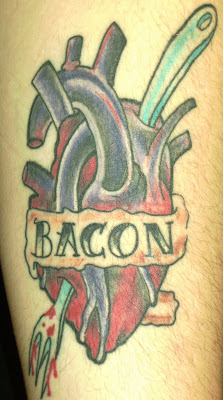 So it makes sense that a chef and a businessman running a gourmet grocery might have a food-themed tattoo, but what's up with this one?

Matt explained that, well, he's a chef, and he loves bacon, and several years ago when he was prepping for an event he was catering, he and a colleague were wrapping rabbit hearts with bacon. He remarked that he ought to get a bacon heart tattoo and his friend challenged him, laughing "You'll never do it!" That was just the incentive Matt needed, and he went with the idea
to Nacho at Studio Enigma in Brooklyn.

It was done all in free-hand and Matt hopes that some day it will be the cornerstone of a food-themed sleeve.

Thanks again to Matt for sharing his bacon heart with us here on Tattoosday! If you're ever in Bay Ridge and have a hankering for fine foods (especially their amazing weekend cupcakes), stop by Robicelli's ( 8511 3rd Avenue) and perhaps you'll catch a glimpse of this great tattoo!
Posted by Tattoosday at 5:55 AM