Dispatch from the NYC Tattoo Convention - Greg's Amazing Back Piece

My wife Melanie and I were standing at the balcony, looking down at the floor of the Roseland Ballroom this past weekend at the New York City Tattoo Convention. This offered us a great vantage point of the stage and the mass of inked humanity in attendance.

Just to our left down below was one shop booth where a guy was standing with blue tattoos on his arms and you could tell he had color on his back, as well. Occasionally, he would turn toward our position and pull up his shirt to reveal his back to people in the booth. Camera clashes blinked and faces lit up with surprise, shock, and sheer admiration.

The first time I saw this, it piqued my curiosity, but so did a lot of things at the show. Then , we saw why he was eliciting such reactions. He turned away from us to reveal one of the more amazing back pieces I have seen. I decided that I'd love to have this as my obligatory post from the convention. 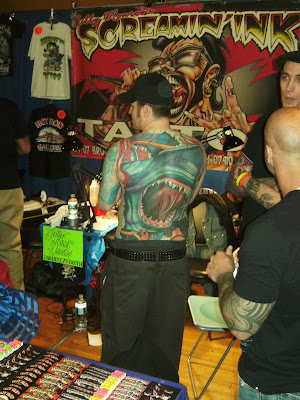 Behold, his work, up close: 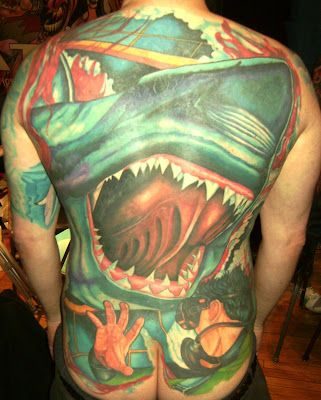 Greg, the host of this astonishing tattoo, spent one and a half years having this worked on by Ian Shafer at Screamin' Ink Tattoo & Body Piercing in Fair Lawn, New Jersey. 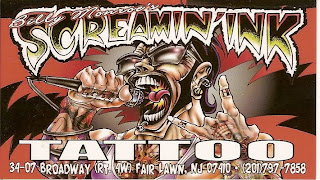 Greg also has this pretty cool Jaws tattoo on his upper left arm: 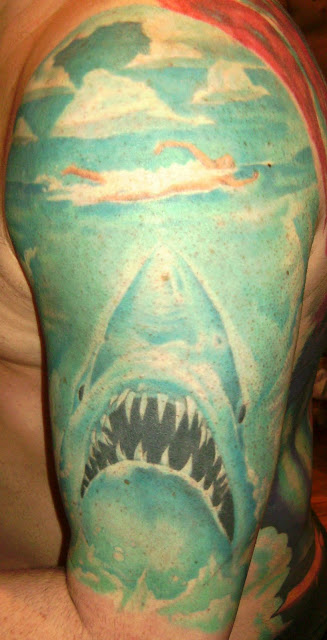 and this amazing Great White shark on the inside of his biceps: 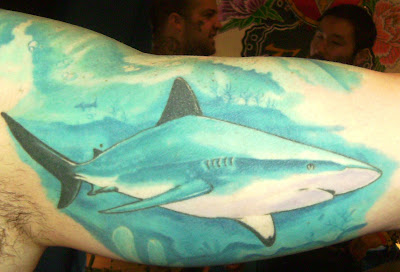 Greg explained to me that, aside from the obvious love of sharks that he has, the original film was the first movie he remembers seeing with his father. It doesn't hurt that he's a Pisces, either, one of the water-based astrological signs.

And, in case you were wondering, Greg told several of us who were admiring the work that the most painful part of this tattoo was the work on the buttocks. Ouch. 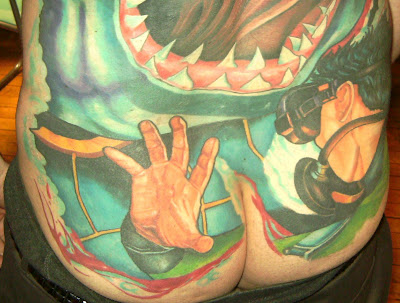 I took photos of several other tattoos that Greg had but decided they would just detract from this phenomenal tattoo.

A hearty thanks to Greg who was very cool in showing off his work on a day where I'm sure he had to remove his shirt more than a few times.
Posted by Tattoosday at 6:12 AM