My First Sailor Jerry Tattoo, in Honor of His 102nd Birthday

If Sailor Jerry were alive today, he'd be a ripe 102 years old.

If you don't know who Sailor Jerry is, you likely don't know much about tattoos.

Sailor Jerry has become a brand, and the savvy folks who are behind the brand, are masters at celebrating the name of Sailor Jerry, and distributing Sailor Jerry rum. Just check out their website if you want to know more.

On Tuesday, I learned that, as they have in years past, the good folks at Sailor Jerry were celebrating the master's birthday with a free tattoo giveaway.

This multi-city event was landing in Brooklyn, which piqued my interest and, since I was not working on Wednesday, I thought I'd give it a shot.

Now, I've been to events with bargain-priced tattoos (see my Friday the 13th event reporting here), and I wasn't willing to show up at dawn, but aimed for a 12:30 arrival at The Gutter, the Bowling Alley/Bar in Williamsburg that was housing the event.

When I turned the corner, I was prepared for a horde of ink-seeking enthusiasts. There was no one in sight. In fact, the venue didn't even open until five p.m.

I decided to walk over to Manhattan Avenue and say hi to the good people at over at Three Kings Tattoo, where I ran into Alex McWatt and met Jason Monroe, one of the artists who would be doling out the Sailor Jerry ink.

After grabbing a quick bite, I headed back to the Gutter where, much to my chagrin, there was someone standing outside, waiting. I was happy to learn, however, that he was merely having a cigarette in the shade. It was 1:00, the bar didn't open until five, the event didn't start for six more hours, and I was alone. Not only was I first in line, I was the line.

Fortunately, it was a beautiful day and I was on the shady side of the street: 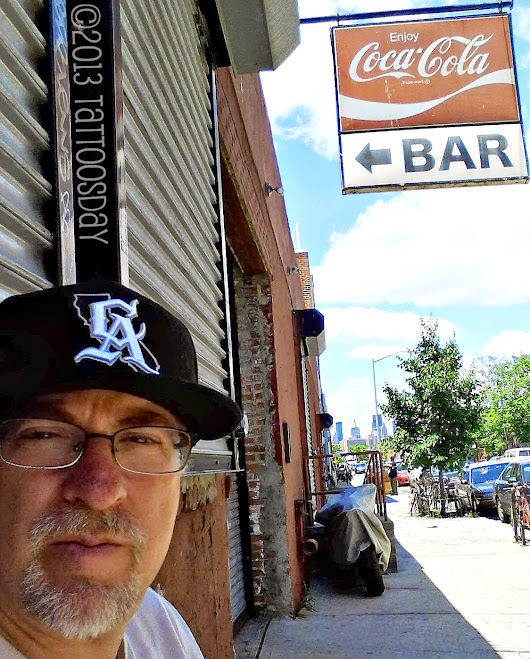 I was hoping to pass the time by interviewing passing tattoo aficionados, but some technical issues limited my true interactions. Nonetheless, I was joined by a woman named Gloria after about an hour, and she was kind enough to provide me with an extra beach chair.

After four p.m., the line had grown to a handful, and by five, when the Gutter opened, we had a couple dozen people waiting along North 14th Street.

Ever the skeptic, and not knowing how the event would be organized, I deputized myself with gathering a list of names, in arrival order, of the handful of us that had arrived so early. No one likes to stand in line for hours only to see late arrivals pop up out of nowhere and jump to the head of the class. Plus, it killed time and allowed me to pass out Tattoosday cards, plugging the site.

Once the Sailor Jerry rep arrived and politely told me the list (now 29 people long) wouldn't be needed, I stopped running back and forth collecting names. Several times before the event started, people came out explaining the rules, handing out drink tokens and pins to redeem for free hot dogs. 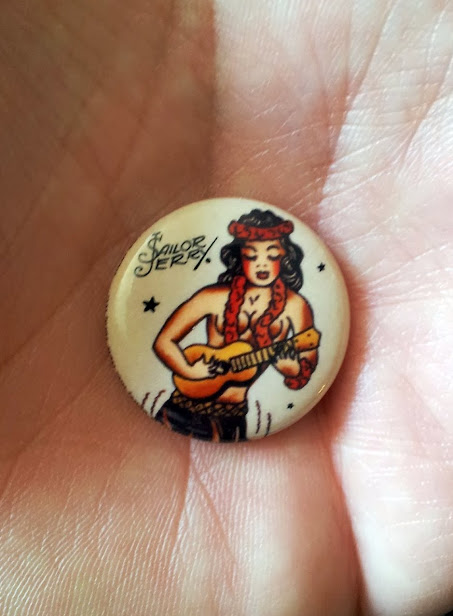 I was the first one in, so things moved pretty quickly. Those of us in line were trying to do the math - how were three artists going to do 102 tattoos in a 7-hour span? "They're small," I was told by the woman running point from Three Kings, "and we have a good system in place." Still, that's four to five tattoos per tattooer every hour, allowing time to break-down and set-up after each piece.

So, here's how it went down:

After eating a delicious hot dog from Bark Hot Dogs, eschewing the onions to spare the tattooer, I signed a release form and headed to the dart board: 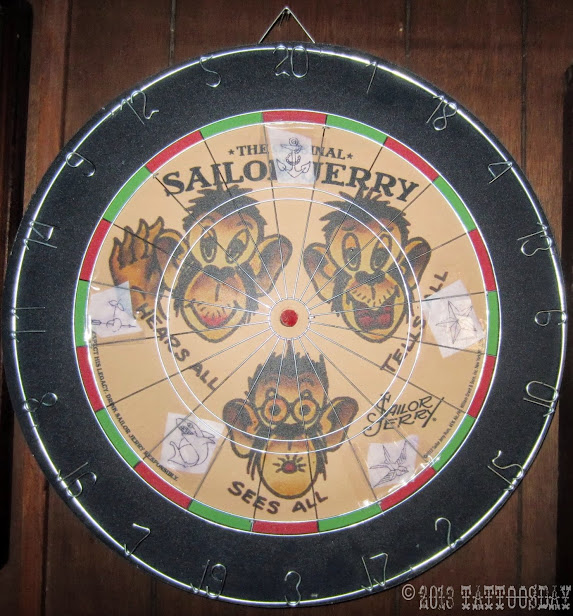 If you look closely, you can see the five options of Sailor Jerry flash that were part of the promotion. Whichever design your dart was closest to, that was the design you got. I would have been happy with anything, except perhaps the cherry, so I aimed low and hit the left side of the bottom monkey - Bingo! I wanted the shark most of all!

Alas, the burden of being first is not having the time to think about where to put the tattoo - which is ironic considering I had six hours to think about it.

Jason Monroe was waiting for me, poised to launch the event with the first tattoo of the night. "Where do you want it?" he asked. I froze and stared as I considered all the options. He broke the spell, "C'mon, arm or leg?" These events usually limit location to limbs because they are generally the fastest parts to tattoo. I blurted out "arm" and sat down. After a brief discussion we agreed to put it up flush against my bigger tattoo on my upper left arm. It seemed to fit there, although if I had to do it over again, I might move it. Then again, I might not.

Jason asked me what color I wanted and I did what I always recommend - defer to the artist. Let them use their best judgment to determine what looks best. He worked quickly and efficiently as I stared out the windows of the Gutter at some of the people still standing in line.

I did learn that Jason had just recently moved up to Three Kings from Atlanta, where he worked at Ink & Dagger Tattoo Parlour.

He finished the tattoo, by my best estimate in a hair under ten minutes. Here it is, two days later: 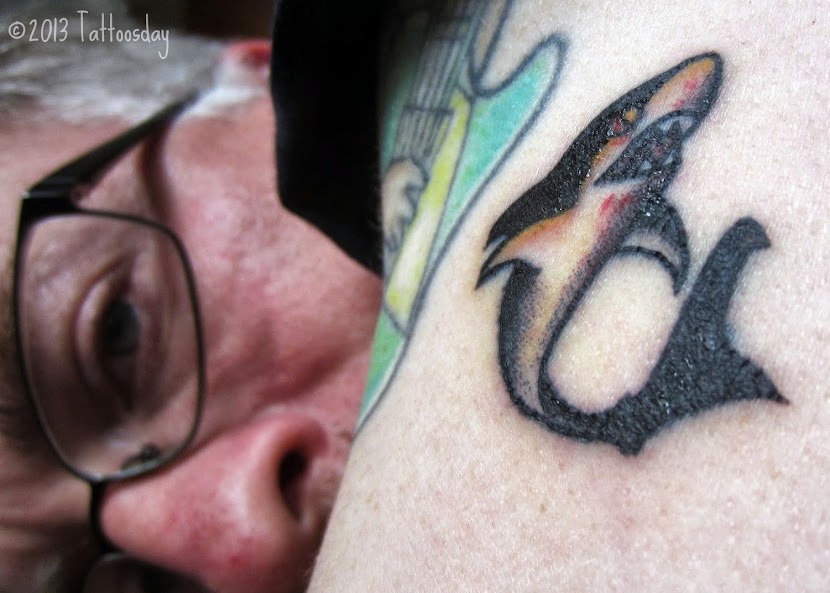 Afterwards, I wandered over to the bar and traded in my token for a Sailor Jerry rum and coke, and wandered about, talking to a lot of the folks I had met earlier in the day, many of whom were waiting patiently for their turn.

Matt Van Cura, from Invisible NYC was tattooing, as well, and I later learned that he was also in charge of VIPs, who had some additional options to choose from.

I chatted with the photographer, Igor, who did a brief write-up and posted over 100 photos from the event over on his website Driven By Boredom. Did I mention there was free bowling, too?

I wasn't long for this party, however, as I was tired out by my marathon goal to be number one. Why show up early? This sums it up:

I did meet some really great people and, who knows, maybe you'll see some of their tattoos in the days to come. I did snap a cool photo on a young lady named Ashley, who shared a particularly unusual tattoo.

Thanks to the awesome folks at Sailor Jerry - do check out their website here. There's a lot of great tattoo history there, and they are involved in some pretty great ink-related events. You can sign up for e-mail alerts and check out some of their archival photos and video.

And thanks to the artists and staff at Three Kings Tattoo, as well, with a special "mahalo" to Jason Monroe, for my giving me my first Sailor Jerry tattoo.


If you are seeing this on another website other than Tattoosday, without attribution, please note that it has been copied without the author's permission and is in violation of copyright laws. Please feel free to visit http://tattoosday.blogspot.com and read our original content. Please let me know if you saw this elsewhere so I contact the webmaster of the offending site and advise them of this violation in their Terms of Use Agreement.
Posted by Tattoosday at 8:38 PM

Very, very cool! I've never waited on line for anything...but for something like this, I think I might.