This winter has been an especially cold one here in New York and, as any loyal reader can confirm, I haven't reported on many tattoos that I have glimpsed in the city.

However, last night at the grocery store around the corner, I met Neal, who let me take a quick snapshot of his foo dog on the left side of his neck: 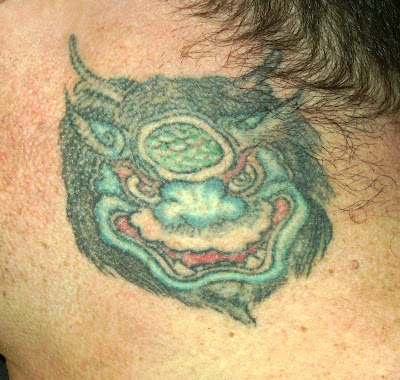 Foo dogs are traditional Asian-style tattoo designs, and have various meanings and interpretations. Click here to see some other posts on the site that have featured foo dog designs.

Neal told me that this was inked by Koji at Studio Engima on Avenue U in Brooklyn many years ago. Work from Studio Engima has appeared previously on Tattoosday here.

Thanks to Neal for sharing his foo dog with us here on Tattoosday!
Posted by Tattoosday at 10:03 AM