Earlier this month, at the Coney Island Mermaid Parade (@mermaidparade), I met Lauren, who was kind enough to share this cool tattoo with us: 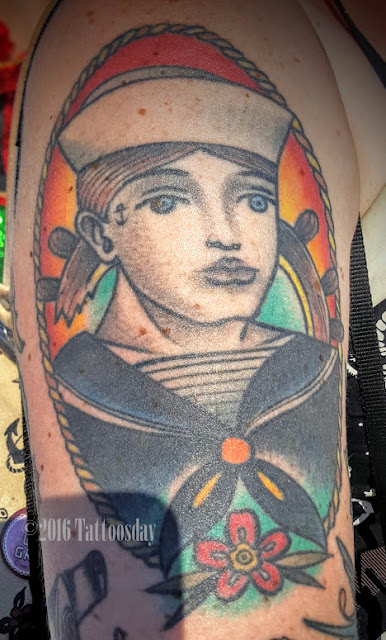 Lauren explained that this tattoo is a "conceptual representation" her son Dylan. The name Dylan means "from the sea."

She had this done at the Wildwood Tattoo Beach Bash by artist Jake Punzalan (@jakepunz), who is the owner-operator of Veritas Tattoo (@veritas_tattoo) in Hartford, Connecticut.

Incidentally, Lauren (@laurenhadams) is a photographer, whose work can be seen here.

Thanks to Lauren for sharing her tattoo with us here on Tattoosday!

If you are seeing this on another website other than Tattoosday, without attribution, please note that it has been copied without the author's permission and is in violation of copyright laws. Please feel free to visit http://tattoosday.blogspot.com and read our original content. Please let me know if you saw this elsewhere so I contact the webmaster of the offending site and advise them of this violation in their Terms of Use Agreement.
Posted by Tattoosday at 6:45 AM No comments:

I met Nina earlier this month outside of Federal Hall in lower Manhattan. She was kind enough to share this really awesome tattoo: 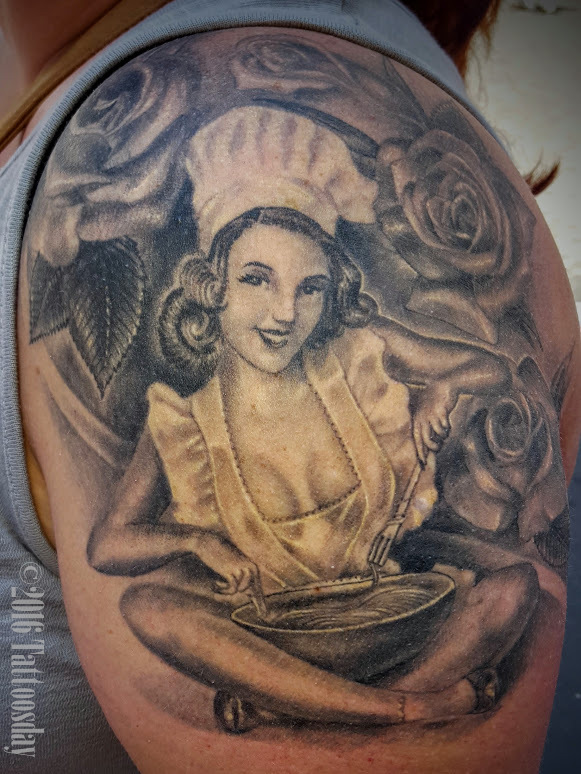 Nina explained, "It's a pin-up chef girl, because I own a restaurant ... Johnny D's in Vero Beach, Florida ... I got the roses added on later."

She credited Isaac Serrano (@tattooartbyisaac), formerly of Scooter's Skin Art in Vero Beach, Florida. He has since moved on to Gypsie Soul Tattoo (@gypsie_soultattooslc) in Salt Lake City.

Thanks to Nina for sharing this great pin-up tattoo with us here on Tattoosday!

If you are seeing this on another website other than Tattoosday, without attribution, please note that it has been copied without the author's permission and is in violation of copyright laws. Please feel free to visit http://tattoosday.blogspot.com and read our original content. Please let me know if you saw this elsewhere so I contact the webmaster of the offending site and advise them of this violation in their Terms of Use Agreement.
Posted by Tattoosday at 5:56 AM No comments:

I met Melanie last week on the subway platform at Broad Street. She had a couple really cool tattoos that she let me snap photos of, and she filled me in later on the details.

Fist up is this really cool owl tattoo with a sugar skull belly:


"The truth is, I have always had an obsession with owls. There is something about their quiet wisdom that intrigued me. They possess secrets and messages that are meant to be told to the right person at the right time. When my father passed, I was always searching for something, for answers. My dad had all the answers and life lessons for everything. Maybe that is why I identify with owls; because in some way, they remind me of my dad; wise with hidden knowledge. I wouldn’t say I wasn’t that young when my father died, I was 24, but I still had a lot of learning and growing up to do. I was lost for a long time and would go on random walks to think, search for things that would fill a void that was left in my life. One night, I was walking down the street when I looked up in the darkness of a tall tree and all I could see was the bright eyes on an owl. At that moment, I felt as if the owl was staring right at me and calming me in a way that my father would; making me feel as if every thing is going to be ok because he will always be there to protect me. So I decided, for protection, for wisdom, for life lessons, I could keep my wise owl close to me on my shoulder."

Then, there is this nifty tattoo on her inner arm: 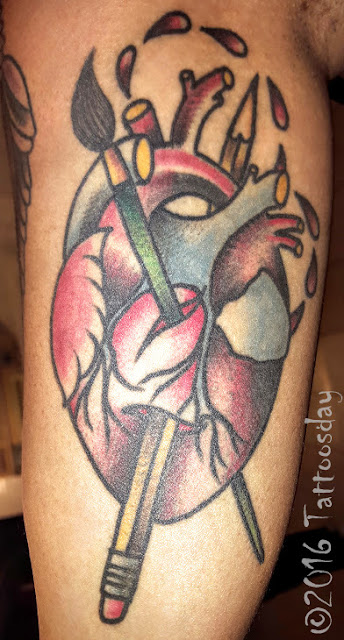 
"Art always gave me an outlet to express my feelings. If I felt depressed or broken, happy or loved, I would sketch, draw or paint. I never had a good way with words, but I could express feelings and things dear to my heart with art."

Both tattoos were done by Matt Huff (@matthufftattoo) from Brooklyn Ink  (@OriginalBrooklynInk) in Bay Ridge. Work from Matt has appeared on Tattoosday previously here, and art from the shop has been featured numerous times over the years,as evidenced here.

Thanks to Melanie for sharing these cool tattoos with us here on Tattoosday!

If you are seeing this on another website other than Tattoosday, without attribution, please note that it has been copied without the author's permission and is in violation of copyright laws. Please feel free to visit http://tattoosday.blogspot.com and read our original content. Please let me know if you saw this elsewhere so I contact the webmaster of the offending site and advise them of this violation in their Terms of Use Agreement.
Posted by Tattoosday at 6:37 AM No comments:

I learned this weekend, through social media, that Cody Todd had passed away.

Not many people may have heard of Cody. As far as I can tell, he published only one title. But he was much loved by those that knew him. We met virtually, through the ether, back when I was assembling the first group of tattooed poets for the Tattooed Poets Project. And, a year later, he sent me more work, which appeared in 2010.

Whether or not the contributors feel it, I regard Tattoosday's ledger of poets (287 and counting) as comrades and friends. They have opened up to me and, when one of them leaves us, I feel like I've lost a friend.

In that spirit, then, do I offer up a composite of Cody's contributions. These appeared on April 22, 2009, and May 1, 2010, respectively, back when I was cross-posting the poems on my old site, BillyBlog. 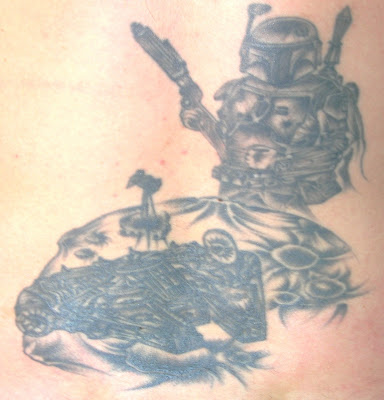 
...the one on my back is still in progress--I foresee at least 5-6 more sessions and touch-ups before I can say it is certainly complete. I like visual collages and pastiche, just as I like the poetic collage of Eliot's Prufrock and The Waste Land, Marianne Moore's Poetry, or Frank Stanford's "The Battlefield where the Moon Says I Love You" and Joshua Clover's The Totality for Kids, are other examples. Poetry that synthesizes subject matter, speaking voices, speaking subjects, and stitch together otherwise independent and unlike things--unified by the mode of collage. 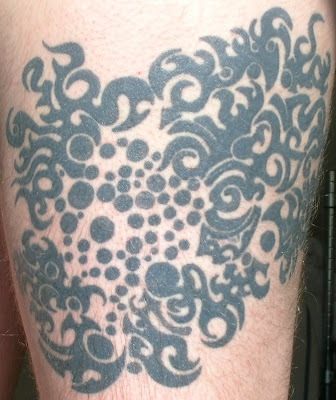 
"The leg tattoo was a personalized redefinition of the "Tribal" tattoos that were the craze when tattoos were no longer isolated to deviancy. Loosely quoting Mike Ness of Social Distortion, in the 1990's, kids could go to a mall and get their little "parts" pierced or walk out of there with a barbed wire tribal band around their biceps. I took a one-page graffiti collage from a notebook that I penciled of hooks, circles, ovoids, anemone-shaped and flame-shaped patterns with tentacles--my first name is actually on the upper left, and a small skyline of Denver with that wacky cash-register shaped building [The Wells Fargo Center] is just 1:00 o'clock from the family of bubbles or spheres centered in the band. I am going to amend this tat with another piece of similar solid black-ink graffiti to wrap a 4-inch band around my knee. That is the thing about tattoos--they are addictive; they beg to grow new limbs, and in that sense they are like little monsters."


Tattooed on the Backs of Eight Fireflies:

Under a dark loam of night,
pure barbed wire.
*
Apparitions dancing
dancing and dancing.
*
Some of us just might bite
the apple those cursed birds already did.
*
Old story: cat bats us away
to reanimate or destroy.
*
Words are the ruse, flight
is the guise, and we are the fakers.
*
Return the favor: grace for
sex or salvation for dust.
*
Time is the knife. Gods the size
of thumbs. Men with bloody hands.
*
We captured our god, the sun,
and feasted on him by torchlight.