As we wind down through the last third of National Poetry Month and our annual Tattooed Poets Project, I look ahead to the coming week with very mixed emotions.

I will focus on the positive, however, and say that Tattoosday is going on a little excursion, traveling nearly 5000 miles to the archipelago known as the Hawaiian Islands.

There, I hope to spot some ink and meet a member of the tattoo community who I very much admire.

Last weekend I threw a photo on the sidebar recommending the new book by artist and writer Tricia Allen, who tattooed my friend Cat several years ago (I wrote about it here). On Saturday, April 24, Tricia will be having a book release party (and tattoo contest) at the Barnes & Noble in Ala Moana Center in Honolulu.

I will be in attendance, covering the event, and reporting on it to our loyal Tattoosday audience. 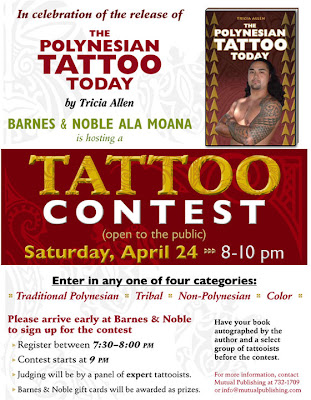 But the purpose of this post is not only to announce my travel plans, but to make some more folks aware of Ms. Allen's talents.

Shortly after posting Cat's ink, my awesome mother, who I can't wait to see, sent me a copy of Tattoo Traditions of Hawai'i, written by none other than Tricia Allen. It was a coincidental gift, but a much-welcomed one at that. 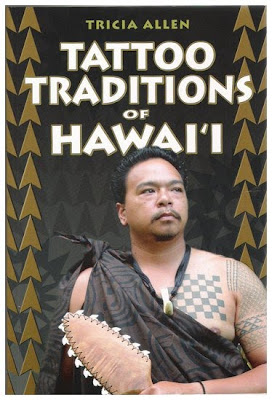 As a resident of Oahu for fifteen years, I have roots in the islands, despite my New Yorkerness, which is itself diluted by a dozen years in L.A.

It was with this appreciation of Hawaiian culture that I gobbled up the book and, rather belatedly I'll admit, have decided to review it here on the site.

What sets this volume apart from most tattoo books is that it approaches the traditional tattoos of Hawai'i from archaeological and sociological standpoints. The reader who is interested in the development of tattoo art through history will find this book informative and fascinating.

And despite the subject matter and the minimal existence of historical photography, Ms. Allen still engages the reader, as her respect and appreciation for the art form guide her efforts.

Once she has dispatched the historical aspect of the tattoo in Hawai'i halfway through the book, the author speaks to the resurgence of the art form in the 1970's and beyond.

And although much has been said about Norman "Sailor Jerry" Collins and his contribution to the popularity of tattooing in the armed services, Ms. Allen focuses not on the widespread social acceptance of tattoos across the United States, but rather, she breaks the second half of the book into anecdotal sections focusing on specific individuals, their tattoos, and their relationship with their own personal and cultural art.

To the lay person unfamiliar with Hawaiian culture, this exercise is a fascinating journey that analyzes more than just a design; it explores the process and sets the modern Hawaiian tattoo apart from the more common tribal art that took the mainland by storm in the 1990's.

What we are left with is a unique pursuit of the understanding of not just the art of tattoo, but the cultural significance of the practice that has gone from a remnant of an ancient tradition to a new expression of cultural and ancestral pride.

Tricia Allen's Tattoo Traditions of Hawaii is a fascinating look at the art of "Hawaiian" tattoo both ancient and modern. It is important to recognize the history of the tattoo in Hawaii, yet also to appreciate the influence of other Polynesian cultures in the art form. Not only do we recommend this title, but we anticipate that Ms. Allen's new title will be similarly compelling.

To learn more about Tricia Allen, the art of the Polynesian tattoo, and to buy her books, check out her great website here.
Posted by Tattoosday at 3:00 PM