Alicia Adams is today's tattooed poet. She contacted me back in February and told me she was moving out to Brooklyn from Southern California in March. So, last week we met in a large Union Square flagship bookstore and I snapped a photo of her stunning tattoo: 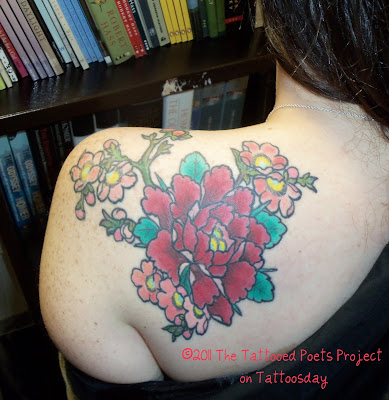 I'll let Alicia explain the story behind this beautiful piece:


This tattoo was done by an artist named Shay Bredimus at Outer Limits Tattoo and Body Piercing in Long Beach, California, the city where I was raised and educated.  I had always known I wanted a tattoo, but I could never settle on exactly what I wanted.  When I went in to Outer Limits, I still didn’t know.  I decided flowers were pretty and timeless and could mean whatever I wanted them to mean.  I decided on a peony because I had just seen my first one and fallen in love with it.  I didn’t know what peonies symbolized, and I didn’t want to know.  I decided I had a lifetime to figure out what it meant to me.
I was getting my MFA in fiction writing, and when I met Shay he told me he had his MFA in painting.  For hours we talked about art and literature and grad school and our lives.  It was the best tattooing experience I could have hoped for, and I fell in love with the finished product immediately.  As I was leaving he invited me to his gallery.  I went when he wasn’t there.  His pieces were huge, each one taking up the better part of a wall, and they were exquisite and done in black tattoo ink only.  I wrote him an email telling him how amazing I thought his art was, and he asked me to come back in for touch ups, and that’s when he added the cherry blossoms. 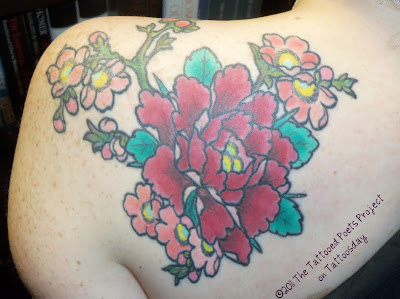 In addition to this tattoo, Alicia is sharing the following poem, "Red Room," which was originally published in The Mas Tequila Review:

Red Room
By Alicia Adams
You wish you had been born from your father’s head.
Like Athena.  When you picture Athena in the womb
of Zeus’s skull, you picture her in a hollow red room
with no corners.  You picture her curled in a ball
and growing larger, fully clothed with battle gear, spear
stuck behind her father’s eye, a migraine pulsing.  When you
picture your own father’s head, you picture it crowded.
But you could have curled around the deep-set grooves
of gray matter, your tiny hands pressed against his frontal
cortex and into his dreams.  And when you were ready,
you could have stood on your shoed feet and pushed
up and hard with rhythmic contractions until your father,
unable to take it any longer, found a way to open
himself and let you out.  You think about this often.
In the back of your own mind, dark and polluted, you can feel
a tumor growing.  One that will ripen and mutate,
killing you slowly, and with little effort.
~~~
Alicia Adams graduated from California State University:  Long Beach’s Fiction MFA program in 2010.  She co-hosted Prose and Cons Radio and is the co-founder of After the Carnival (Literary Events).  Her work has been published in several magazines and anthologies, including most recently How Dirty Girls Get Clean and Beside the City of Angels.
Thanks so much to Alicia for sharing her tattoo and poem with us here on Tattoosday's Tattooed Poets Project!

If you are reading this on another web site other than Tattoosday, without attribution, please note that it has been copied without the author's permission and is in violation of copyright laws. Please feel free to visit http://tattoosday.blogspot.com and read our original content. Please let me know if you saw this elsewhere so I contact the webmaster of the offending site and advise them of this violation in their Terms of Use Agreement.
Posted by Tattoosday at 10:14 AM