If you’re still recovering from a day of camping out and fighting the crowds for Black Friday holiday gifts, might I suggest one more item for your list? 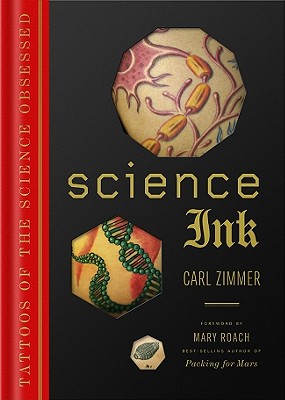 Science Ink: Tattoos of the Science Obsessed was recently published by Sterling Press and it rates as one of the finer titles on tattoos that I have seen in while. Science Ink is written by Carl Zimmer, a science writer with great credentials and whose blog rates a spot on my blogroll shortlist.

I have been a fan of Carl Zimmer’s Science Tattoo Emporium since 2008, even warranting a mention in a stand-alone post here.

I was excited to hear last year that he was compiling a book on the subject of scientific tattoos, as, unlike a lot of the work in London Tattoos (my last review, which appeared here), the ink is drenched in meaning. 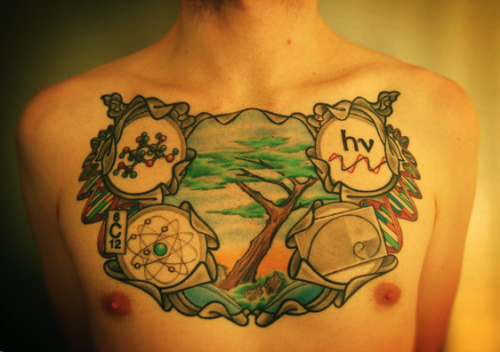 As a storyteller and a writer, I’ll admit to favoring tattoos that have stories and/or specific meaning behind them. Not that I don’t appreciate a fine work of  body art that is beautiful for beauty’s sake. I just find myself more intellectually stimulated by tattoos that pack a narrative punch. This is also why I dig literary tattoos. 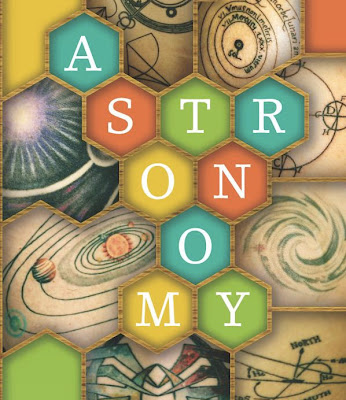 All that being said, Zimmer should be commended for compiling a whole slew of scientific ink, and organizing it in such a thoughtful and pleasing way. Chapters are divided up by category (Physics, Chemistry, Astronomy, Earth Sciences, etc.) with photos of the contributors work, along with a paragraph or two devoted to explaining the accompanying pieces. These are not tattoos that resulted from walking in to a shop and picking flash off the wall. Not that there’s anything wrong with that. Rather, we’re treated to tattoos that were clearly thought out and executed with the purpose of connecting to the individuals passion for their intellectual stimuli.


Tattoo purists may look at this book and cringe at the quality of some of the tattoos depicted. But the quality is not the point, and there is a lot of fine work, nonetheless. With a few exceptions, we are not seeing work contributed by tattoo aficionados. Instead, we get a glimpse of tattoos from people that you don’t normally associate with ink: scientists, doctors, university professors, and anthropologists. For that reason, Science Ink succeeds in drawing in the reader to the individual narrative behind the tattoo. What makes someone who is uninked take the leap and go under the needle?

Ultimately, it is the answer to that question that propels the mini-narratives forward and make Science Ink such a compelling read. Above and beyond the appreciation of tattoos, the book speaks to a larger audience, those who are steeped in the sciences and those who don’t consider themselves part of a “tattoo culture”. Ultimately, not everyone who is science-minded gets a tattoo related to their field, but a mathematician may understand someone’s desire to get an interesting equation inked on their forearm more than they would, say, getting a flaming skull or a scattering of cherry blossoms.

The biggest fault I find with Science Ink is not an original one. Marisa over at Needles and Sins voiced the disappointment in her review, as well, that the artists who created the body art are rarely named by the contributors. I always ask Tattoosday contributors to disclose their artists’ names to give credit where credit is due. Occasionally I  meet people who do not recall the names of their artists, but that tends to be a smaller percentage. Zimmer includes a thumbnail “visual index” of contributors. It would be nice, if there is ever a Science Ink II, to include an index of artists, as well. As a saving grace, Zimmer does credit the artists on his website here, but I only discovered that by accident.** I’d imagine, however, that to the bulk of the reading audience, the tattooist’s identity  is not as important and may seem extraneous, but for many it is nice to see credit where credit is due.

All in all, however, Zimmer hits the ball out of the park with a wonderful tattoo-themed product that I fully endorse and recommend.

With the holidays just around the corner, this would make a great gift for the science obsessed person in your life!

**After this posted, Carl Zimmer e-mailed me:


"Thanks! I agree that the artists should get credit. My designer and I put together a list, but a change in schedule prevented the publisher from putting it into the book. We'll be sure to get it into the next printing".

If you are reading this on another web site other than Tattoosday, without attribution, please note that it has been copied without the author's permission and is in violation of copyright laws. Please feel free to visit http://tattoosday.blogspot.com and read our original content. Please let me know if you saw this elsewhere so I can contact the webmaster of the offending site and advise them of this violation in their Terms of Use Agreement.
Posted by Tattoosday at 6:49 AM

Artist credit arrived too late for the first batch of the book, but will be included in the next print shortly, so that important problem will be fixed!