Yesterday's post featured a sleeve from a guy named Phoenix. Today we have a sleeve that centers around a phoenix.

Anyone who's spent any time in New York City could tell you that bike messengers have a lot of great ink. Not all, of course, but quite a few. Fixtures in the city streets, especially in warmer months, if they're not zipping by on their bikes, you can often catch a glimpse of something cool. However, I've featured very few of these folks, just because they're usually in such a hurry, it's hard to catch them.

Fortunately, I spotted Seth securing his bicycle under Madison Square Garden late one afternoon back in September, and I had a chance to compliment his sleeve, at the center of which is this phoenix:

Sleeves are often challenging to portray on Tattoosday, as they generally require multiple shots and several takes, preferably in a controlled environment, like, say, a tattoo studio. But I always try to do my best to capture more than just the central element. 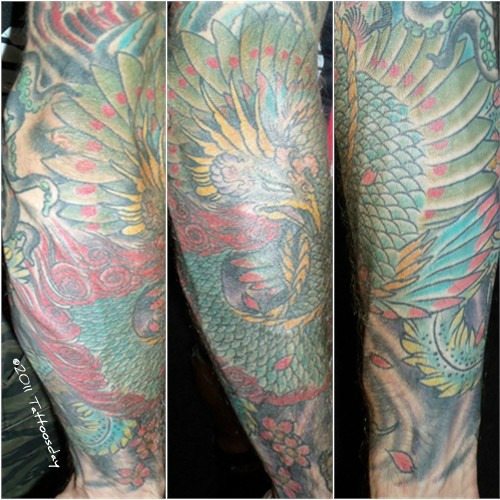 Seth credits his work to Jacob Redmond, when he was at Oddball Studios in Portland, Oregon. Redmond has since moved to Atlas Tattoo, also in Portland.

Thanks to Seth for sharing his phoenix with us here on Tattoosday!

This entry is ©2011 Tattoosday.
If you are reading this on another web site other than Tattoosday, without attribution, please note that it has been copied without the author's permission and is in violation of copyright laws. Please feel free to visit http://tattoosday.blogspot.com and read our original content. Please let me know if you saw this elsewhere so I contact the webmaster of the offending site and advise them of this violation in their Terms of Use Agreement.
Posted by Tattoosday at 10:28 AM