A Spot of Hawaiian Ink on the New York City Subway

Earlier this week, I posted about my experience on Ink Master, getting a tribal tattoo that was inspired by my upbringing in Hawai'i. Do note that I have not referred to this as a Hawaiian tribal piece, which is a whole different thing altogether.

Just to illustrate, one of my "leftover" posts from 2011 is this tattoo:

This was a real treat for me, spotting an authentic Hawaiian tattoo, in New York City of all places.

Looking back to last June, I had just attended a networking event at Bowlmor Lanes in Times Square and was headed home to Brooklyn. On the 8th Avenue subway platform at 42nd Street, I spotted a bunch of folks with t-shirts bearing Hawaiian names. I got to chatting with them. Turns out they were affiliated with Na Keiki O Ka Mo'i, an outrigger canoe club from Wai'anae, Hawai'i, and they were in town to compete in the 2011 Liberty World Outrigger Competition.

I was shocked. Outrigger canoes in the East River? I've lived in New York for almost 15 years and never knew that this existed in the Big Apple!

There was a whole lot of local folks from Hawai'i on the platform, and when an express and local train pulled in simultaneously, chaos erupted as the visitors scattered into both downtown trains.

I sat down on an "A" train next to a handful of the group and struck up a conversation with a few people. I spoke with one guy, in particular, named Sam "Kamu" Kapoi. Go figure, the talk turned to tattoos and Sam stretched out his left leg to show me his ink.

Sam and I have kept in touch, so I was able to get some additional information on this piece.

Sam is a filmmaker and was accompanying the group as they competed in New York.

The art of Hawaiian tattoo has deep roots in the culture of the islands, and every aspect of a tattoo has personal meaning that is often held very privately by the tattooed individual. You just don't go up to someone with a Hawaiian tattoo and ask, "So what does it mean?" 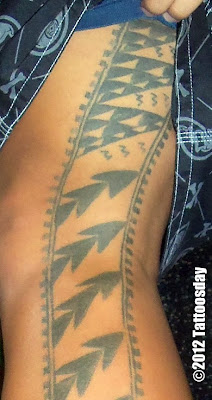 Sam said it himself in a message to me, "the tattoo itself ... is my family design, very sacred." He credited his artist as Keone Nunes, who specializes in traditional Hawaiian tattoos and uses the tapping method.
Here's a nice clip on YouTube with Mr. Nunes discussing the art of kakau:

The juxtaposition of this illustration compared to my own experience getting a tribal piece on a tattoo reality show is stark. Whereas I love my new tattoo, I in no way hold it in the same high regard as the traditional art of kakau in Hawai'i. I feel honored to have been lucky to come across an example, by chance, in New York.

A big mahalo nui loa to Sam for sharing his traditional Hawaiian ink with us here on Tattoosday.

Sweet. Ka Mo'i is a club out of the west side of Oahu, Nanakuli/Wai'ana'e/Maili/Makaha area. Good bunch of guys.

The Liberty Challenge has been going on for a long time, but back in the late 90s when I still paddled I knew of no community clubs that went, only "sponsored" crews.

this is what i consider quality education. Learning about things that are relevant to my interests.