A couple weeks back, on an unseasonably warm and sunny February day, I spotted Steve on Penn Plaza, wearing a short-sleeve shirt, with some pretty cool ink peeking out from his arm.

Intrigued, I approached him, and started up a conversation about his tattoos. He showed me several pieces, including this, a back piece that is in progress: 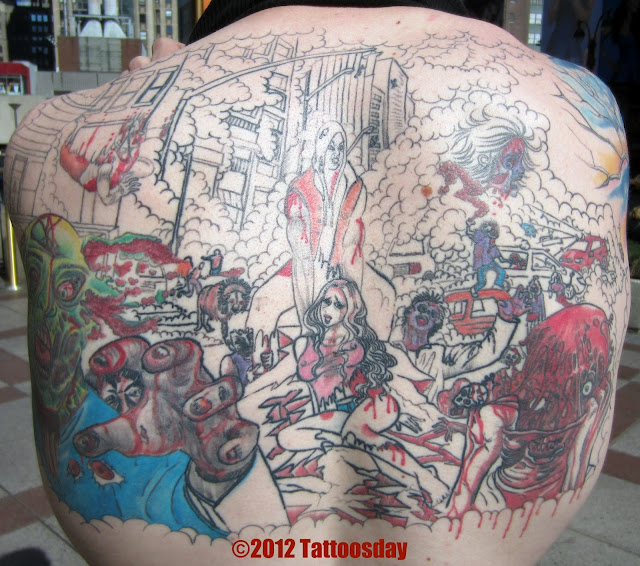 Take a closer look - this is pretty cool. I spoke to Steve at length about his work. He had recently left the U.S. Marines, where he had been stationed overseas in Japan. It was there that he chanced upon an artist named Aya, at a shop called Silent Ink, located in the city of Iwakuni.

As Steve, explained it, Aya is a deaf-mute (thus the shop name) and he became a huge fan of her work while serving in Japan. "It's a full zombie apocalypse scene," he told me, and he plans to fly out to Washington State when Aya next travels to see her fiance in the U.S., so she can complete the work.

I always defer to the contributor, as to whether they want to share work in progress, and Steve had no qualms about letting us see this early stage of the back piece. I was able to get a closer look at the completed sections: 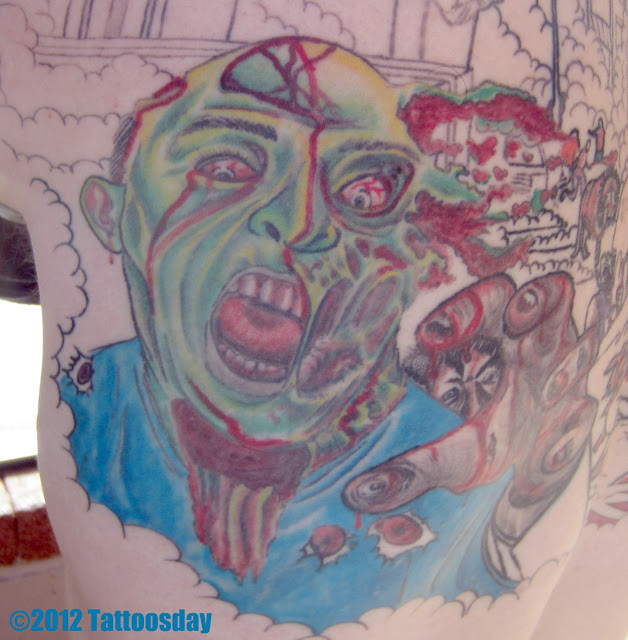 I just love the colors and shading behind the tree that borders the upper right arm: 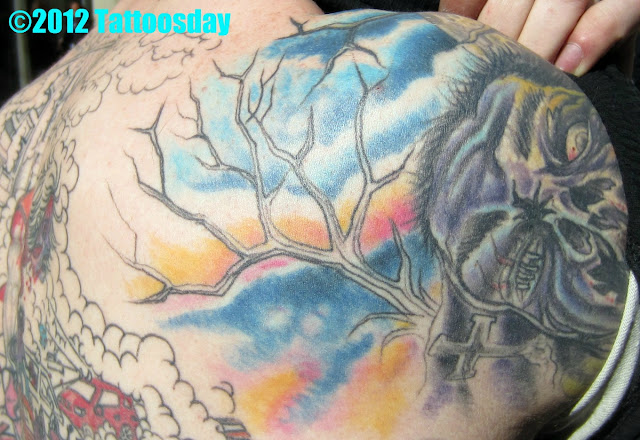 Steve estimates that she has already spent approximately 38 hours on his canvas over several sittings. "I like to sit for a long time," he told me.  I certainly look forward to hearing back from him when Aya has completed this work!

Thanks to Steve for sharing his ink with us here on Tattoosday!


If you are reading this on another web site other than Tattoosday, without attribution, please note that it has been copied without the author's permission and is in violation of copyright laws. Please feel free to visit http://tattoosday.blogspot.com and read our original content. Please let me know if you saw this elsewhere so I contact the webmaster of the offending site and advise them of this violation in their Terms of Use Agreement.
Posted by Tattoosday at 6:02 AM