I met Shana on the subway back in June. She shared this tattoo: 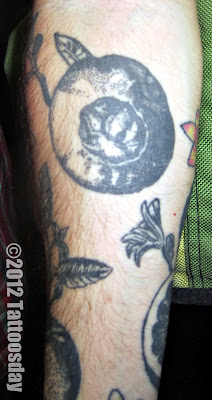 Shana further elaborated by explaining that she associates oranges with times that she felt calm and safe and that, among the "thirteen-ish" tattoos, many are different versions of oranges and orange blossoms.

Furthermore, Shana identifies as a transgender individual, and he intimated that the oranges and accompanying blossoms balance out the masculine elements in his appearance.

This was inked by Jason McAfee at Temple Tattoo in Oakland, California.

One may have noted that I used both masculine and feminine pronouns when writing about Shana. I took my cues from Shana's biography on her website:


"Her visual art has been shown at The New York Center for Book Arts and Southern Exposure and is in the collections of the Walker Art Center and the University of California, Irvine, University of California, Berkeley, and University of Southern California libraries’ special collections.  His essays have appeared in Flow Magazine (flowtv.org) and Clamor Magazine, and she contributed a chapter addressing the role of the prison industrial complex in Hurricane Katrina inThrough the Eye of Katrina: Social Justice in the United States, published by Carolina Academic Press.  [Shana] has given talks on transgender representation and deconstructing “hate crime” in queer politics at the Center for Lesbian and Gay Studies at the City University of New York, Yale University, and Oberlin College.  She is also a long-time member of Critical Resistance, a grassroots organization fighting the use of the prison industrial complex to address social problems."

Thanks to Shana for sharing this fascinating tattoo with us here on Tattoosday!

If you are seeing this on another website other than Tattoosday, without attribution, please note that it has been copied without the author's permission and is in violation of copyright laws. Please feel free to visit http://tattoosday.blogspot.com and read our original content. Please let me know if you saw this elsewhere so I contact the webmaster of the offending site and advise them of this violation in their Terms of Use Agreement.
Posted by Tattoosday at 9:43 AM