A long, long time ago, in a place called BillyBlog, an idea was formed. It was the idea that became Tattoosday. I decided to celebrate the many tattoos I encountered, with a photo (or two) and a story. A Miami Ink for the blogging crowd. Nothing about the artists' personalities, all about ink. In fact, all you see is the art, and very little else of the hosts.

The idea was to find strangers willing to let me take pictures of their tattoos, and post them with an accompanying text explaining when and where and why they chose to be inked. But I needed a guinea pig, so I started with a co-worker, Sephora, who seemed to enjoy talking with me about tattoos and music of all sorts. She was game, and she inaugurated the Tattoosday feature here.

And the rest is (brief) history. The Tattoosday feature, appearing every Tuesday was so much fun, I spun it off into its own blog and it has enjoyed a small, small viewership. But a blog can only dream. Through the odds and ends and goods and bads of Tattoosday's growing pains, I would occasionally saunter over to Sephora and chat about tats. The woman who sat in front of her, Erika, would often join in the conversation, but was mum about her own tattoos (if she had any, I couldn't tell. I wasn't scanning her clothing edges for ink slippages.)

Then in November, Erika was wearing a short-sleeved shirt and lo! and behold! What did I see? 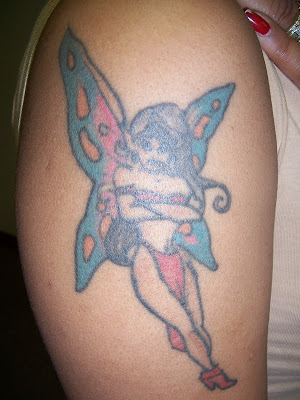 Well, now I was chatting with Erika about tattoos and she mentioned she had a lot. I asked her if she would be interested in Tattoosday and she was game. So, over the last few weeks, starting with our holiday party when she was wearing a dress that showed off most of her back, through very recently when I snapped the pictures of the last of Erika's dozen (or so) tattoos, I managed to capture the catalog of Erika's ink, which is presented here for the Tattoosday readership.

Enough of my gab, lets roll with the body art!

Erika doesn't know exact dates on all her ink, so we're going to go chronologically. First up is this basic, rudimentary rose on her right lower calf. 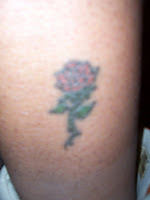 By the way, Erika's tattoos all have pretty good story behind them. About 14 years ago, circa 1993, she was 18 and went into Your Choice Tattoo, in East Meadow, New York (on Long Island, for you non-New Yorkers). She was scared to death of what then pain would be like, Her boyfriend suggested the location on her lower leg because it wouldn't hurt so much. Of course, in hindsight, that's one of the more painful spots because it is so close to bone.

The co-owner of Your Choice Tattoo, Joe, made her go home and get her birth certificate, because he thought her ID was fake. He even joked that she would need to get a letter from her mother!

Two years later, at 20, she was back at Your Choice, this time working with artist Michelle, who put this unicorn on the right side of her lower back: 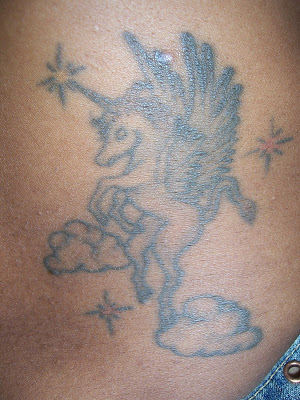 Erika explains that she was still a kid at heart, and that she had a lot of unicorns in her room. She saw this design on the wall and went with it. It's a reminder of that little girl she once was.

A year later, she was back at Your Choice Tattoo, with Michelle again. Like for most people, Ericka's tattoos serve as signposts for different periods of her life. In 1996, she was dating a guy who was heavy into the Black empowerment philosophy. "He was a big 'Power to the People' guy," Ericka recalls, "And I wanted to show him I was down with that." She exhibited this commitment by having an Egyptian ankh inked on her left shoulder: 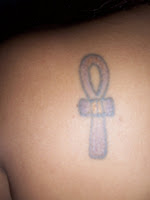 Because the symbol simultaneously recalls Egypt and represents the hieroglyphic symbol for "life," it still resonates as a powerful image on her skin.

A year later, she had befriended another tattoo artist, Joe, at Behind the Lines II Tattooing in Jamaica, Queens. She had this small piece inked on her right shoulder: 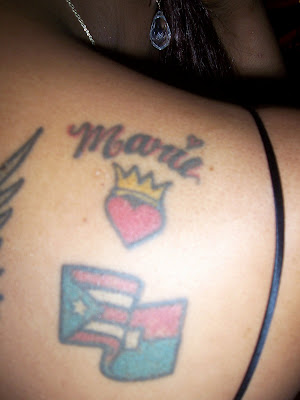 The piece in question is the heart with the crown and the name "Marie". It's a tribute to her mother, Marie, who, Erika acknowledges, is "the Queen of her Heart". te to her mom is another piece by Joe at Behind the Lines. It's a hybrid of the Puerto Rican flag and the Haitian flag. Her father is from Puerto Rico and her mother is from Haiti and she wanted a tribute to her heritage.


A year later (approximately 1998), she was hanging out with Joe and things were slow in the shop. He offered up, "I'm bored. Want a tat?" Ericka was game and this bluebird was inked on her neck: 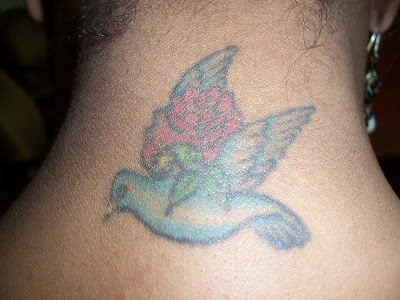 She acknowledges that there is no real story behind it, but that she does like the art. Ericka is a great example of how tattoos can be addictive and that, once you get one, you want to keep going.

This concludes part 1 of Ericka's Ink. Stay tuned for part 2!

Thanks again to Ericka for sharing her tattoos!
Posted by Tattoosday at 11:35 PM