Eric's Memorial for his Grandmother

I spotted this memorial on Eric's forearm in a local Duane Reade drugstore: 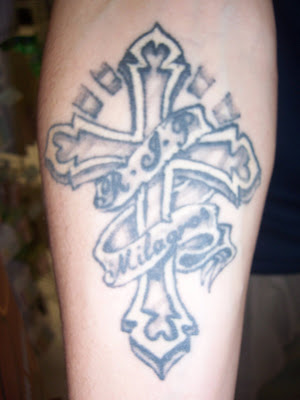 This was Eric's first tattoo, inked about three years ago after his grandmother, Milagros, passed away.

He told me he was both "interested and nervous" when he had this done. He had no regrets, as it is a way for his grandmother to be with him, in spirit, forever.

This was inked at Hypnotic Designs, in Sunset Park. Their work has appeared previously on Tattoosday here. That is where the "Brooklyn Born 'N' Raised" tattoo was inked.

Thanks to Eric for sharing his memorial tattoo with us!
Posted by Tattoosday at 5:57 AM