A common Tattoosday ritual for me is to go to the bank at lunch and, time permitting, head over to the Manhattan Mall and make a circuit through the food court, before heading back to the office.

Needless to say, as any regular Tattoosday reader could tell you, pickings have been slim since the mercury dropped below 50 for the season.

Yet I am an optimist, and forever on the lookout for ink, as evidenced by last week's "Queen of Hearts" post.

However, my hopes were slim as I headed out at lunch and encountered a drizzle that the meteorologists hadn't forecasted until the evening. Nonetheless, I went to the bank on 6th Avenue and then visited the mall.

The location introduced me to Alex (here) and has had promising ink displays, discovered only when the weather drove me indoors. I passed out a flier or two in the food court earlier this winter, but to no avail. The one problem with the food court is inherent in its very nature. Most
denizens are eating, and I am reluctant to disrupt the meals of people, tattooed or otherwise.

On Tat-Tuesday, I made the food court pass, seeing nothing, and was on my way out when two
tattooed stars behind a young woman's ear caught my eye: 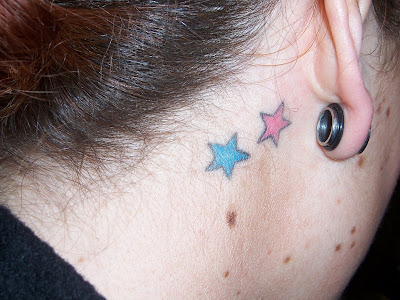 To be honest, I've never been bowled over by stars, but these were colorful, and it is January, and even the simplest tats can be fraught with meaning.

Nicole was sitting alone (another plus, on the approachability scale, as I tend to shy away from groups) and she had a coffee and Cinnabon on the table, as she played with her cell phone.

I approached and asked if I could talk to her about her stars and she gladly obliged.

Nicole and I discussed the two stars behind her right ear.

They have no significance, they are just decoration, "for the hell of it," done partially out of boredom.

So the next question is generally the "how many do you have" inquiry. Nicole reacted to the question like most people who have a ton of ink: uncertainty. My limited experience leads me to believe that, somewhere between twelve and eighteen, one loses count.

At that point the ink has taken on a life of its own, and the clusters, sometimes themed, sometimes not, become sleeves.

Such was Nicole's situation: under the winter coat and long pants blossomed an explosion of colorful ink. I did not see them, nor did I ask, but she catalogued a host of designs, "mostly girlie stuff," like stars, flowers, and hearts.

"About six years worth..." of accumulated ink.

Like most people, Nicole is loyal to one shop, New York Adorned (featured previously here and here on Tattoosday). The artist who inked the "baby pink" and "baby blue" stars was Bryan Randolph.

Thanks to Nicole and her two shining stars! Here's hoping she'll make a return to Tattoosday in the future!
Posted by Tattoosday at 5:57 AM