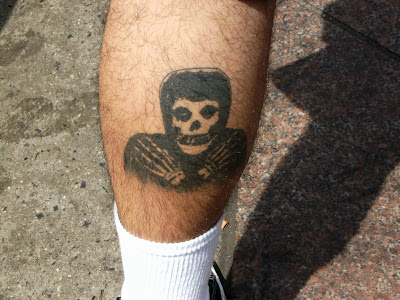 I spotted Mike and Tracy on 34th Street on Thursday, July 17. They were the third and fourth people I photographed that day.

Mike had the logo from his favorite band, The Misfits, on the back of his left calf. It's one of his three tattoos.

Tracy liked the art for the piece she has, on her upper left arm:

It's one of her four tattoos: 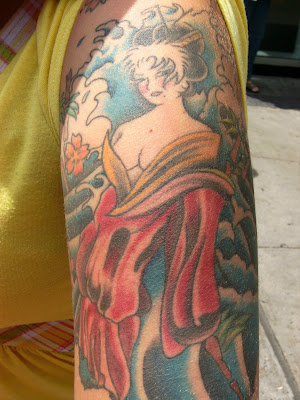 Both Mike and Tracy, visiting New York from San Diego, had their work done at their local shop All-American Tattoo Company. Stevie inked the Misfits piece and "Little C" did the work on Tracy's bicep.

Thanks to both of our visitors for sharing their ink here at Tattoosday!

UPDATE: Mike sent me the link to his band's MySpace page. They have a great name, The Filthy Few. Check them out here.
Posted by Tattoosday at 6:43 AM