Time Flies When You're Living and Dying 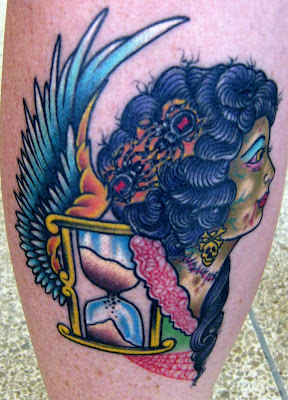 "No," I explained to Heather, "I don't troll the post office for tattoos." She was asking why, of all places, I stopped her in line at the Fort Hamilton Post Office in Brooklyn.

Really, it was a series of coincidences. My younger daughter was sick today, so I stayed home. Otherwise, I would have been at the main post office in Manhattan. But there I was, after an eternal wait in line, when I looked back and saw Heather talking to someone before getting into the endless line. I gasped. Heather has a lot of ink. She has sleeves (I think one was 3/4 and one was 1/2, I could be wrong) and a back piece that looks to be of significant volume, with other tattoos scattered across her self from neck to toe.

When I asked her about her tattoo count, she gave me an answer that you generally don't hear, except from the heavily-tattooed. "I estimate I'm about 40% covered." Wow. A lot of ink, indeed.

Heather gets tattooed by two main guys, and the piece she offered for Tattoosday was done by Lou Andrew at Third Eye Tattoos in Park Slope. You may be familiar with Lou's work, from Fabiana, whose ink has been appearing recently on Tattoosday.

Heather explained the piece, saying that the girl in the artwork has been "zombfied" to represent death

and the hourglass, with the wings, is symbolic of the fleeting nature of time ("time flies"), and ultimately, life. The detail is vivid and very well done: 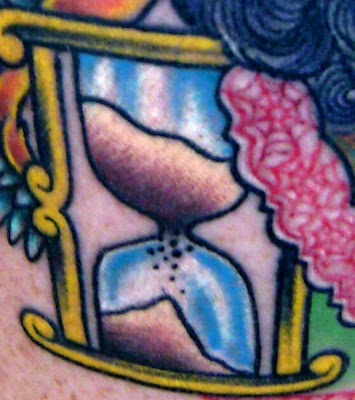 I love the grains of sand falling in the hourglass and the red cobwebs.

Heather explained that this tattoo, on the back of her left calf, will have a companion piece on the back of the right, but not until fall. She acknowledged that her practice is not to get tattooed in the summer, when fresh ink is most susceptible to sun damage and fading.

Much thanks to Heather for sharing her tattoo here on Tattoosday! I hope she will make a return appearance in the future, perhaps later in the year when she has the other piece inked.
Posted by Tattoosday at 5:14 AM