Lizz's Tattoo Anchors Her to Her Brother

One of the things that I love most about writing Tattoosday is the way New York City plays a significant role in the narrative. It may not be a blog about New York, but it would be a much different one without this city I call my home.

This is one of those posts that is tied to the fabric of New York.

This evening, I was taking advantage of a free ticket to see a revival of Guys and Dolls at the Nederlander Theater, which is still in preview and opens March 1st.

I was standing in line outside, about twenty minutes before curtains. The theater, on the south side of West 41st Street, faces the back of the New Amsterdam Theater to the north.

There were assorted people milling about across the street, folks I assumed were crew from Mary Poppins, outside having their last cigarettes before their show started.

I spotted a woman who had exited the theater and saw, from across the street, that she had a tattoo on her right forearm. I was doing nothing but standing in line anyway, so I crossed over 41st Street to say hello.

Lizz, who works as a dresser, was more than happy to share her tattoo: 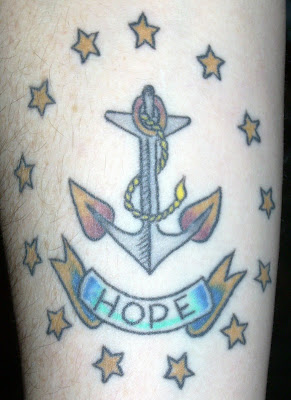 What's remarkable about this traditional-style anchor tattoo is that she had it done at the same time, on the same spot, and with the same design as her younger brother.

For Lizz, this was her most recent, her nineteenth tattoo. For her brother, five years her junior, it was his first.

The piece is based on the state flag of Rhode Island, where Lizz grew up: 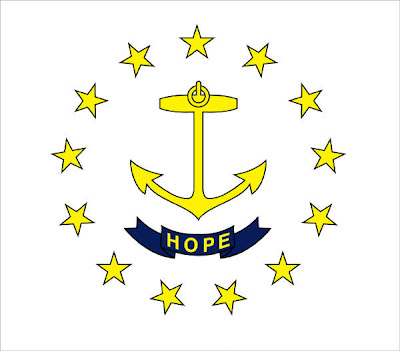 Tattoos in general have significant meaning for their bearers. When the same design in shared, and the act of being tattooed is similarly experienced, the emotional charge instilled in the work is compounded.

Another example of siblings sharing a tattoo can be seen here.

Lizz told me that she doesn't rely on one artist, but that her ink has come from different shops all over the country.

Thanks so much to Lizz for sharing her ink with us here on Tattoosday!
Posted by Tattoosday at 7:45 PM

As a Rhode Islander, I heartily approve, although I was hoping to get the same thing on myself, and now I'll be copying :)