Carrie Returns with Some Matrimonial Ink 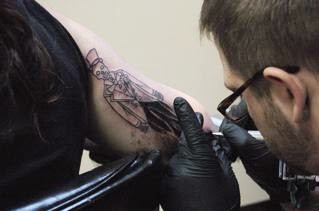 The celebration of Dio de los Muertos (the Day of the Dead) is a perfect match for tattooing, as it is associated with bright colors and what I call a "pleasant morbidity," in the form of skeletons and skulls. 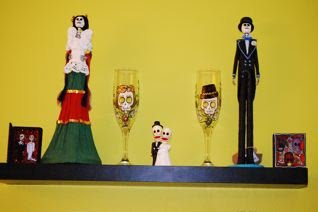 Some of my favorite posts here at Tattoosday have been related to the Day of the Dead (see here and here).

So it was with great pleasure that I learned that Carrie, of the amazing ship tattoo, was sending me new ink photos, and moreso when I saw they were in the Dio de los Muertos theme.

Carrie sent a slew of photos relating to two tattoos she and her new husband, Ryan, received as a wedding gift from their friend, Evan Lindemann, who is a tattoo artist at Revolver Tattoo in New Brunswick, NJ. This is the same shop where her pirate ship was (and continues to be) inked.

The couple were married on Halloween of 2008, and honeymooned the following week, which coincided with the Day of the Dead celebrations: 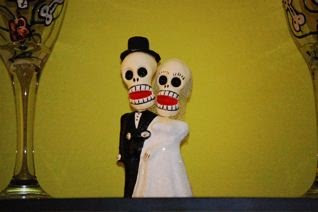 and our toasting flutes were hand painted from Mexico and had day of the dead bride and groom skulls as well [see photo above]....Going to Mexico was the icing on the cake to finish out our awesome wedding....In Mexico we went to Playa del Carmen, shopped like crazy on 5th ave and ... found some beautiful Day of the Dead figurines and shadow boxes.....
For our wedding gift, ...Evan...wanted to give us a tattoo each. 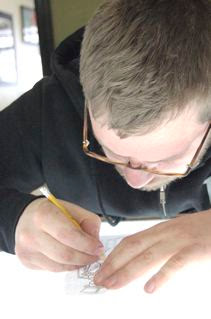 We love tattoos, so it was one hell of an offer....so...we decided that I would get the Day of the Dead figurine that is the skeleton in the tux representing the groom

and Ryan would get the Day of the Dead woman figurine which represents the bride:

So, we have a piece together and they are beautiful!" 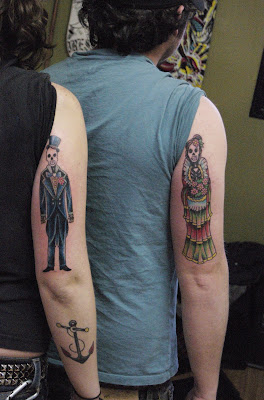 Carrie concludes, that these tattoos "symbolize our love, marriage and honeymoon".

She added that this may "sound kind of corny," but she is right when she says they are beautiful.
A belated congratulations to Carrie (and Ryan) for the marriage, and their incredibly cool (and romantic) his-and-hers tattoos. In a day and age when so many married couples tattoo each others' names on their bodies, it is heart-warming from an artistic perspective to see the level of creativity and thought that went into these pieces.

And a hearty thank you to Carrie (and Ryan) for sharing their work here on Tattoosday!

Posted by Tattoosday at 6:41 AM

I absolutely love this. The story behind it just makes it that much better. I also plan to get some sugar skulls tattooed on me in the future.

What a cool idea! I have an awesome sugar skull on my right arm.

thankyou for the nice comments.