Kait, On Her Own Two Feet 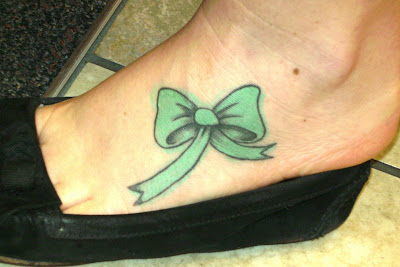 While passing through Borders at 2 Penn Plaza, I spotted Kait's feet, both tattooed on their outside edges. She graciously allowed me to take pictures of both pieces.

On her left foot is a green bow, inspired in part by the fact that she is known where she grew up for always having a bow on her, whether it be in her clothing or in her hair. It's her trademark, of sorts, and the tattoo insures that she'll never be "bow-less". 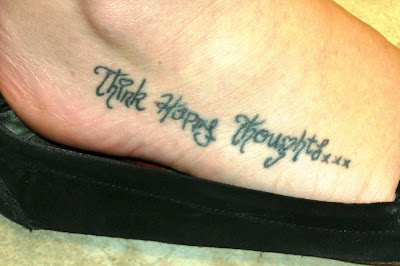 "Think Happy Thoughts" is a tribute to her friend Max, a graffiti artist, who passed away a year or two back. The script is in her own hand, in emulation of a free-form style that reminds her of graffiti.

Kait has five tattoos in all, including two surnames inscribed on the insides of her wrists. One is the last name of her adopted family, and the other is the surname of her birth mother.

All of her work was done at Big Joe & Sons Tattooing & Piercing in White Plains, New York.

Thanks to Kait for sharing her tattoos here on Tattoosday!
Posted by Tattoosday at 1:00 PM

I love the bow, like! Reminds me of my Alkaline Trio heart tattoo, I'm always wearing stuff with that logo on it =] Her other tattoo's awesome too, must have wrecked though!!

those are my footsies! <3