For those of you visiting Tattoosday for the first time, I refer to posts based on reader submissions as Tattoorism. That is, tattoos from out of town visiting us here in the blogosphere.

There was a pleasant surprise in my in box this morning: 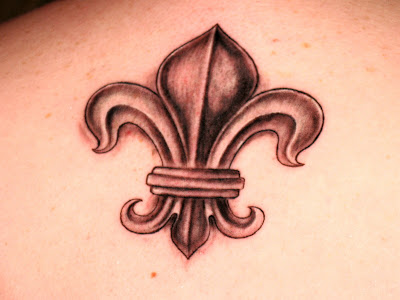 Skeptics may say, "What's the big deal? It's just a fleur-de-lis!" But we here at Tattoosday don't think that way. Tattoos aren't just designs inked into the flesh, they generally carry significance that transcend the skin and touch the soul.

And I'm always interested when someone I've never met takes the time and energy to send me a photo and elaborate on their tattoo. Christina's tattoo, above, is a case in point.

I'll let Christina explain her one and only tattoo:

"Tom Berg at SoCal Tattoo in San Pedro, CA did my ink. He designed the elaborate tattoo for the main character in the tv show "Prison Break," [see below] among others.

My husband works for the show and knows Tom, so he was able to get an appointment in two weeks instead of the one-year waiting list that he normally has. So we had that going for us, which is good.
People ask me all the time if the 4-inch fleur de lys between my shoulders means that I really really love the [New Orleans] Saints, or the Boy Scouts... Nope. The fleur has been popping up in my life for years. I wore a ring with a fleur on it, identical to a ring that my best friend in high school wore, which we got on my first road trip. That relationship was instrumental in breaking me out of my shell in school. I wore the fleur on a necklace through college. Then, I spent a year living in Florence, Italy. The symbol of the city is the Florentine "gigli," or lily, the Italian version of the fleur de lys. 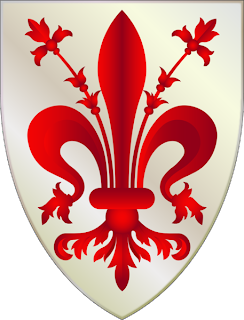 One of my housemates said something that stuck with me. "Florence doesn't change you, it only makes you more like you are."
For me, my tattoo is a symbol of my journey toward becoming who I am supposed to be, doing what I am supposed to do, living how I am supposed to live. I got it two months after I married the love of my life, my best friend since I was 12."

The Fleur-de-lis (also spelled fleur-de-lys) has appeared on Tattoosday previously here. I'd like to thank Christina for her continued readership and contribution to the blog!

I cannot guarantee that I'll publish every tattoo e-mailed my way, so I don't openly solicit contributions. However, every once in a while, it's a nice change of pace, both for us here at Tattoosday and, I believe, the readers. Thanks again, Christina!
Posted by Tattoosday at 5:45 AM

Very cool story behind her tattoo! I had the honor of photographing the marriage of Christina and her best friend, pre-tattoo. =)