Today is the 50th anniversary of Hawaiian statehood.

As a former resident of the Aloha State, I thought we could honor the occasion with a Hawaii-themed tattoo:

This cool tiki is on the right forearm of Dani, who estimates she is 60% covered in ink.

Dani and I met near Penn Plaza and had a lovely chat about tattoos. This tiki is one of her favorites.

Don Lussier at Artfreek Tattoo basically free-handed the design on her. Don is the ex-husband of Doris, who is a friend of Dani's. A piece from Artfreek appeared last month on Tattoosday here.

She has the tiki as an acknowledgment of her heritage, being part Hawaiian, with ancestors two or three generations back.

She loves the detail Don put into the piece, especially the heart inked on the tiki's left arm. 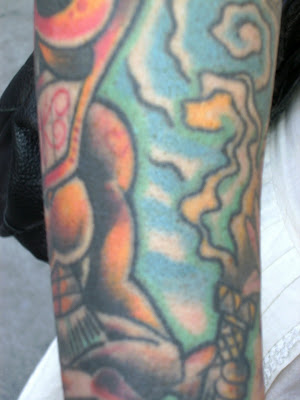 Mahalo nui loa to Dani for sharing this great tattoo with us here, and helping Tattoosday celebrate Hawaii's Golden Anniversary!
Posted by Tattoosday at 5:41 AM