Born in Costa Rica, a one-time resident of Canada, and now a denizen of the Bronx, Oscar has traveled all over the world.

He expressed his passion for mountain biking to me as we talked in the Amtrak section of Penn Station.

This made sense to me as I had noticed his bike-themed tattoo on his left calf:

The wheel is specific to a mountain bike he owns, and it is connected around the back of his leg by a bicycle chain: 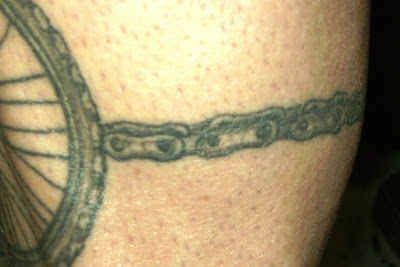 The detail is quite good, almost three-dimensional, and the tribal flourishes up and down the leg add volume to the piece.

This was his first tattoo, inked on his birthday, after many years of thinking about tattoos. He waited until he was ready, so that he could get something with deep meaning for him.

Since then, he has added three other tattoos, all created by Richard at Jent's Tattooing in Yonkers.

He graciously shared those as well. First is a tribal raven: 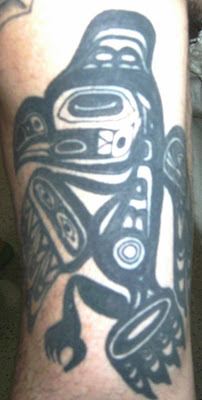 Oscar spoke of the raven's relationship with God. In the folklore, Raven helps the gods to raise the moon and the stars. He also is known as the prankster, who is always trying to catch the Sun.

In addition, there is a tattoo of Shiva, who Oscar acknowledges as a deity who "destroys ignorance and builds knowledge": 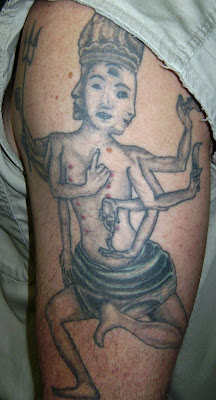 Finally, Oscar wears a Third Eye on his right bicep, which carries its traditional meaning: 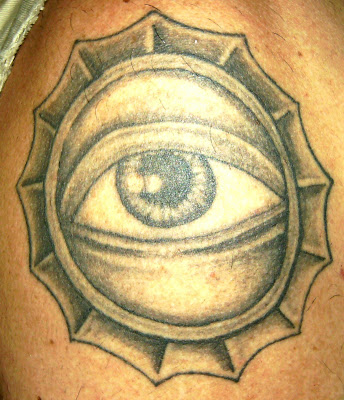 Many thanks to Oscar for sharing his amazing tattoos with us here on Tattoosday!
Posted by Tattoosday at 6:14 AM