Last month I featured a leg tattoo belonging to Daniel, who was visiting from Australia. At the time he alluded to the fact that he had a pretty cool chest piece, as well. Understandably, he wasn't about to whip his shirt off in Penn Station in December.

Anyway, Dan was kind enough to send me this picture. Although not the best quality from a photographic standpoint, it's clear enough to see what a great tattoo this is: 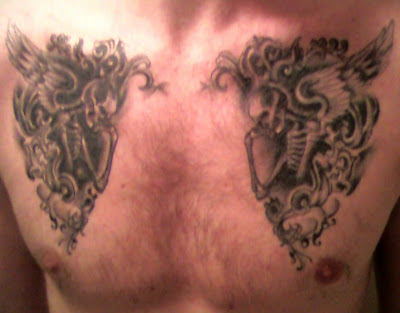 The inspiration from this art, also related to the band Machine Head, can be seen on their main web page here. Like his other tattoo featured previously, these pieces were done by Jonny at Abandoned Art in the Wanneroo section of Perth, Australia.

Daniel says they took two sittings and about five hours to complete.

Thanks to Daniel for following up with this photo here on Tattoosday!
Posted by Tattoosday at 6:16 AM