I met Daniel in Penn Station yesterday, one of the few people with short sleeves, and certainly the only person with visible ink.

Visiting from Perth, in Western Australia, Daniel has seven tattoos, and he offered up the piece on his left calf: 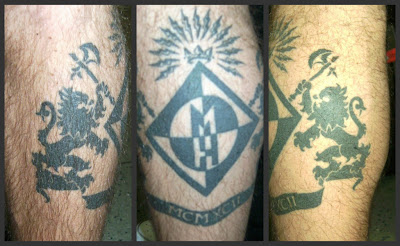 Daniel is a huge fan of the band Machine Head, and fans of the group will surely recognize that the piece is based on the Machine Head crest: 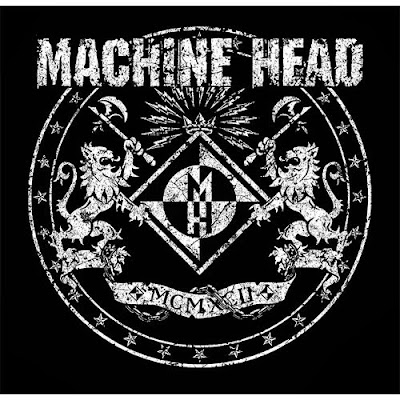 The Roman numeral MCMXCII refers to 1992, when the band released its first album.

Daniel has seen the group perform seven times (as of this writing). When I asked if the band had ever seen his tattoo, he did tell me that he had met their tour manager at their airport in Brisbane and he had given him backstage passes to the show. Unfortunately, his plans fell through and he wasn't able to make it to the concert.

The tattoo was done by Jonny at Abandoned Art in the Wanneroo section of Perth.

Thanks to Daniel for sharing his tattoo with us here on Tattoosday.

As a postscript, the woman that was with Daniel indicated that his chest tattoo was also very cool, but Daniel understandably did not want to go topless in Penn Station. He indicated he might send a photo in at a a later date, so stay tuned......
Posted by Tattoosday at 5:48 AM