On Sunday, spring-like temperatures made being outside enticing. I was heading home when I spotted, from a good fifty yards away, a young lady approaching. Even from that distance, I noticed her bare calves and the discernable mark of a tattoo above her left ankle.

So, as she approached, I slowed down to talk to her. When I asked her about the tattoo, she indicated that I had stopped her before, which puzzled me, as I didn't recognize the ink. She then clarified that her right arm hosted a honeycomb sleeve, with bees. Since it was covered, I didn't recognize her.

I first met Erika in July 2009 and stopped her after she walked by me on the street. At the time, she said that the sleeve was a work in progress, and she'd rather not have it posted. I asked if I could take a picture anyway, and promised it wouldn't go live until she was done with the art.

I believe I ran into her (or maybe just saw her on the subway) last summer, and the sleeve still amazed me.

So here, on the last Sunday in February, she was again. Since her arm was covered, I asked if I could take a picture of the tattoo I had spotted on her ankle. She agreed, although she qualified it as one of her oldest tattoos: 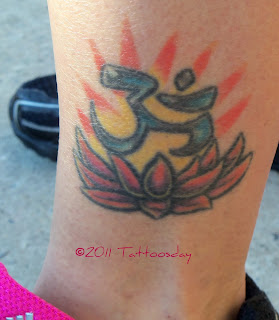 Erika said this piece is about 15 years old and called it an omkara or aumkara. That would be an om symbol floating above a lotus flower.

She also said that she had not had any more work done on the sleeve and she didn't mind sharing it at this stage of the game. The artist is in Portland, Maine, so it's not easy to just go and get it periodically updated.

Definitely worth taking a closer look at the details: 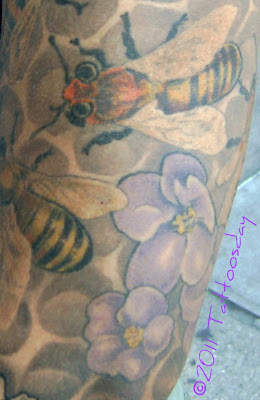 The artist of this honeycomb and her "killer bees" is Chris Dingwell of Sanctuary Tattoo.

Thanks to Erika for sharing one of her older tattoos, as well as this phenomenal sleeve-in-progress!
Posted by Tattoosday at 6:30 AM