I don't travel too often, but last week, I had an overnight business trip to Covington, Kentucky. I was excited to do some inkspotting outside of New York, but the bustle of the airports and the late arrival on a rainy evening didn't bode well for early success.

However, after my co-worker dropped me at the front of the hotel in Hebron, Kentucky, so I could get an early start on check in, he was a bit surprised to come in after parking the rental car to see me chatting with Taylor, the front desk representative, as she was unbuttoning her top shirt to share these tattoos with me:

While checking in, I had noticed a flaming diamond tattoo on Taylor's wrist and, after explaining a little about Tattoosday, she happily agreed to participate, showing me these two owls which she liked a lot more than her wrist tattoo.

She explained that she got these after going through a rough time, and that she appreciated the symbolism of owls, and the wisdom they represent. The owl is often associated with the Greek goddess Athena, who is often depicted with an owl perched on her shoulder. 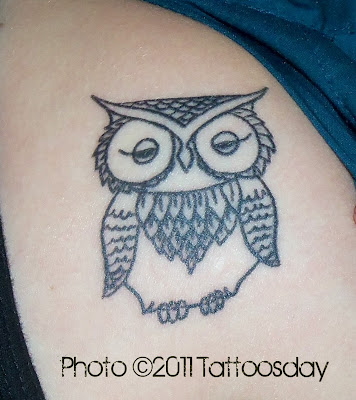 Taylor had these tattooed at Arts Ink in Covington, Kentucky, by Boddhi.

Thanks to Taylor for sharing her owls and welcoming me to Kentucky with some cool ink!
Posted by Tattoosday at 6:12 AM