Two for Tattoosday: Elise Remembers Paris and Shares a Cardinal

These next tattoos would not be here on Tattoosday were it not for signal problems at the Jay Street subway station in Brooklyn.
For it was an e-mail alert about those problems disrupting train service which sent me away from my normal routine and directed me last week to the Herald Square subway station to catch a D train.
It was there on the southbound platform that I met Elise who displayed some cool ink on her arms. We chatted a bit and, because her top partially obscured sections of her tattoos, she told me she'd email me photos. Not everybody who says that means it, or follows up, but Elise did not disappoint and sent me the following photos later that evening.
First, is this interesting tattoo on her upper right arm:

Elise calls this “Paris in a Woman,” which is inspired by the fact that she was born and raised in France. The idea of including the Parisian cityscape came from Charmaine Olivia, an artist based out of San Francisco. Elise included the Eiffel Tower in it. The tattoo was done by John Poverty, who tattoos out of Goose Tattoo in Brooklyn.
Lower on her right arm is this amazing bird tattoo: 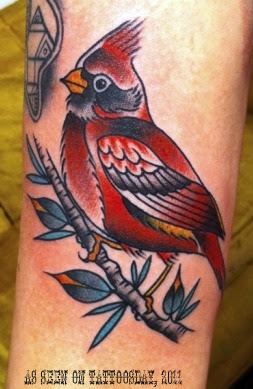 “The cardinal by Mike Adams [of True Sight Tattoo Company in Detroit] was inspired by family. Once all my siblings and I ‘flew the coop,’ my parents took up bird watching, and are now avid cardinal lovers.  Mike inked this out of Thicker Than Water in Manhattan, [where he] will have a short residency in the beginning of December.”

Work by Mike appeared over the summer on Tattoosday here.

Thanks again to Elise for sharing these wonderful tattoos with us here on Tattoosday!
This entry is ©2011 Tattoosday.

If you are reading this on another web site other than Tattoosday, without attribution, please note that it has been copied without the author's permission and is in violation of copyright laws. Please feel free to visit http://tattoosday.blogspot.com and read our original content. Please let me know if you saw this elsewhere so I contact the webmaster of the offending site and advise them of this violation in their Terms of Use Agreement.
Posted by Tattoosday at 6:42 AM