Veronica Reveals What's Under Her Sleeve

Running an errand in SoHo two weeks ago found me hopping on an R train at Canal Street, which is not my normal routine. Sometimes a break in a routine can be rewarding.

Sitting on the train was Veronica, who had this intriguing ink running out from under her left shirt sleeve: 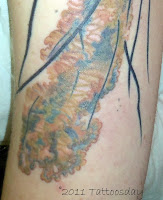 What is that? I wondered. A tree? Curious, I asked her about it and was rewarded with not only the answer, but a photo of a pretty spectacular tattoo:

Veronica explained that she had seen an exhibit at the Georgia Aquarium in Atlanta that featured jellyfish with really cool lighting effects that brought out these sea creatures fluorescence. She went to see Gustavo Rizerio at Invisible NYC and this beautiful tattoo was the end result. Here's a clip of what she was talking about:

I also learned, coincidentally, while talking to Veronica, that her sister Leyna, had appeared here on Tattoosday back in June 2010!

Thanks to Veronica for sharing her beautiful jellyfish with us here on Tattoosday!


This entry is ©2011 Tattoosday.
If you are reading this on another web site other than Tattoosday, without attribution, please note that it has been copied without the author's permission and is in violation of copyright laws. Please feel free to visit http://tattoosday.blogspot.com and read our original content. Please let me know if you saw this elsewhere so I contact the webmaster of the offending site and advise them of this violation in their Terms of Use Agreement.
Posted by Tattoosday at 6:38 AM