Laura Brooks Shares Her Parents Names and Her Toe Knuckles

I met Laura Brooks outside of Macy*s on 34th Street last month. She has a lot of tattoos (she estimates 60% of her canvas is covered), so I deferred to her, asking which she wanted to share with us here on Tattoosday.

She offered up her wrists: 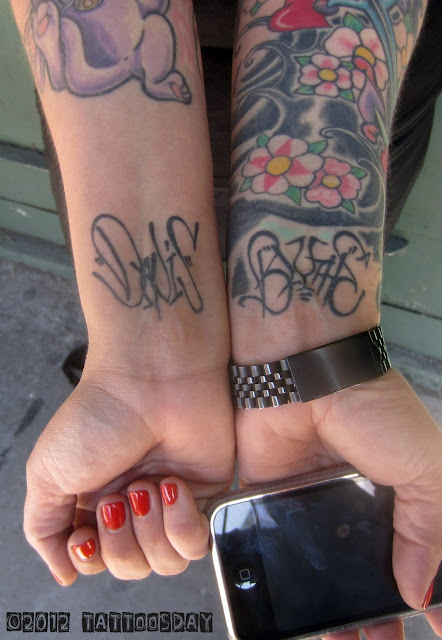 These are her parents names, Davis and Blythe, and they were designed by a friend of hers whose graffiti moniker is "Gamble". She credited the actual tattooing to an artist named Joe from Beelistic's Blood Money Tattoo in Cincinnati, Ohio. 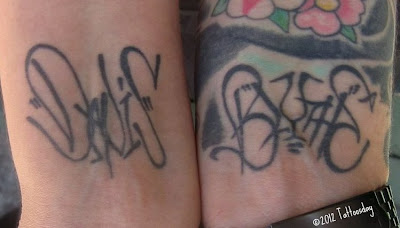 Laura Brooks also informed me that she had tattoos on her toes, but she was wearing shoes when I met her. Later that day, she held to her word and sent me a photo of her toe knuckle tattoos which read "Dirty South": 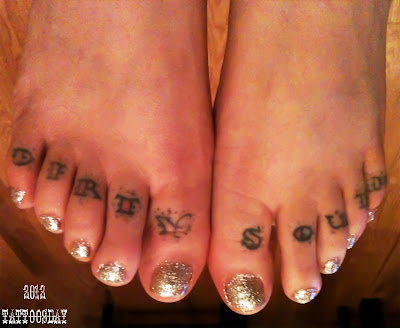 
"The artist was Brent Hale at No Regrets Tattoo Emporium in Memphis, TN. It was actually his idea. I wanted to get toe knuckle tattoos & couldn't decide what I wanted it to say. He came up with it while we were working on a different piece ... The significance is kind of obvious. Hometown pride. (:

One thing about toe tattoos: by far the most painful spot. And you have to get them touched up about half a dozen times before they look right. I should probably go get them done one more time but I'm procrastinating because of the pain."

Thanks to Laura Brooks for sharing her tattoos with us here on Tattoosday!

If you are reading this on another web site other than Tattoosday, without attribution, please note that it has been copied without the author's permission and is in violation of copyright laws. Please feel free to visit http://tattoosday.blogspot.com and read our original content. Please let me know if you saw this elsewhere so I contact the webmaster of the offending site and advise them of this violation in their Terms of Use Agreement.
Posted by Tattoosday at 9:58 AM

Laura has some of the most beautiful tattoo work I have ever seen. And that's saying a lot because at first I just didn't get it.