It has been a while since we celebrated "Musician Mondays" here on Tattoosday so, it is with pleasure that we return with a musical tattoo.

Last month I had the pleasure of meeting my wife's cousin Erica for the first time.

She and her girlfriend Moki came over to visit for a small gathering at our home set up to memorialize another cousin who had recently passed away overseas.

And, whereas Moki had significantly more tattoos (we'll see one tomorrow), Erica has only one, and she was kind enough to share it here: 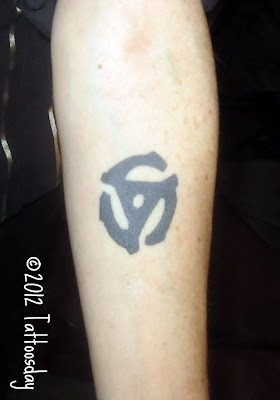 People born in the CD age might not recognize this as a "spider," which was a piece of plastic inserted into the center of small 45-rpm records that allowed them to be played on the small spindles on record players. Records were those things that we, back in the Dark Ages, listened to music on. Erica currently is the bass player for a band called Poof Pony. She has played in other acts as well, including Turbonegra (a San Francisco-based all-girl tribute band to Norwegian punk band Turbonegro) and punk stalwarts MDC (in the 1990's).

Erica explains how she came by this tattoo:


"I got it done at Temple Tattoo in Oakland - it may have been by Jonah Levin but I wouldn't swear by it ... My friend Kristen had twin hellions that must have been two or three at the time - she had an appointment at Temple and let me know in no uncertain terms that I had a choice - I could either babysit the monsters or go with her to get my own. That meant no choice to me! Since I was turning 45 and love records, the tattoo was a no-brainer. Perhaps I should have thought about it though because quite soon after the ink had settled it was pointed out to me that I had actually put the Spin Magazine logo on my arm and that was just about as cool as getting the Rolling Stones tongue logo (not). I have since seen another bass player with it in exactly the same spot, and it's been confused with being both a swastika and a hazardous waste symbol, which just proves that I don't always run with the brightest crowd."

Thanks to Erica for sharing this iconic tattoo with us here on Tattoosday!

Posted by Tattoosday at 9:10 AM

I love the idea of getting a tattoo that is a tribute to music. I like the symbol Erica chose because it’s universal enough that it can be applied to many different bands or groups. The tattoo seems to fit her personality well—being a musician in multiple groups. Even though Erica may have come across some criticism or confusion (for example the tattoo being confused with a swastika) I think that anyone who appreciates music will be able to appreciate the tattoo. Overall, I think Erica made a fantastic choice.