Our next tattooed poet is Paul Scot August, who shared two tattoos with us. On his right shoulder sits an angel: 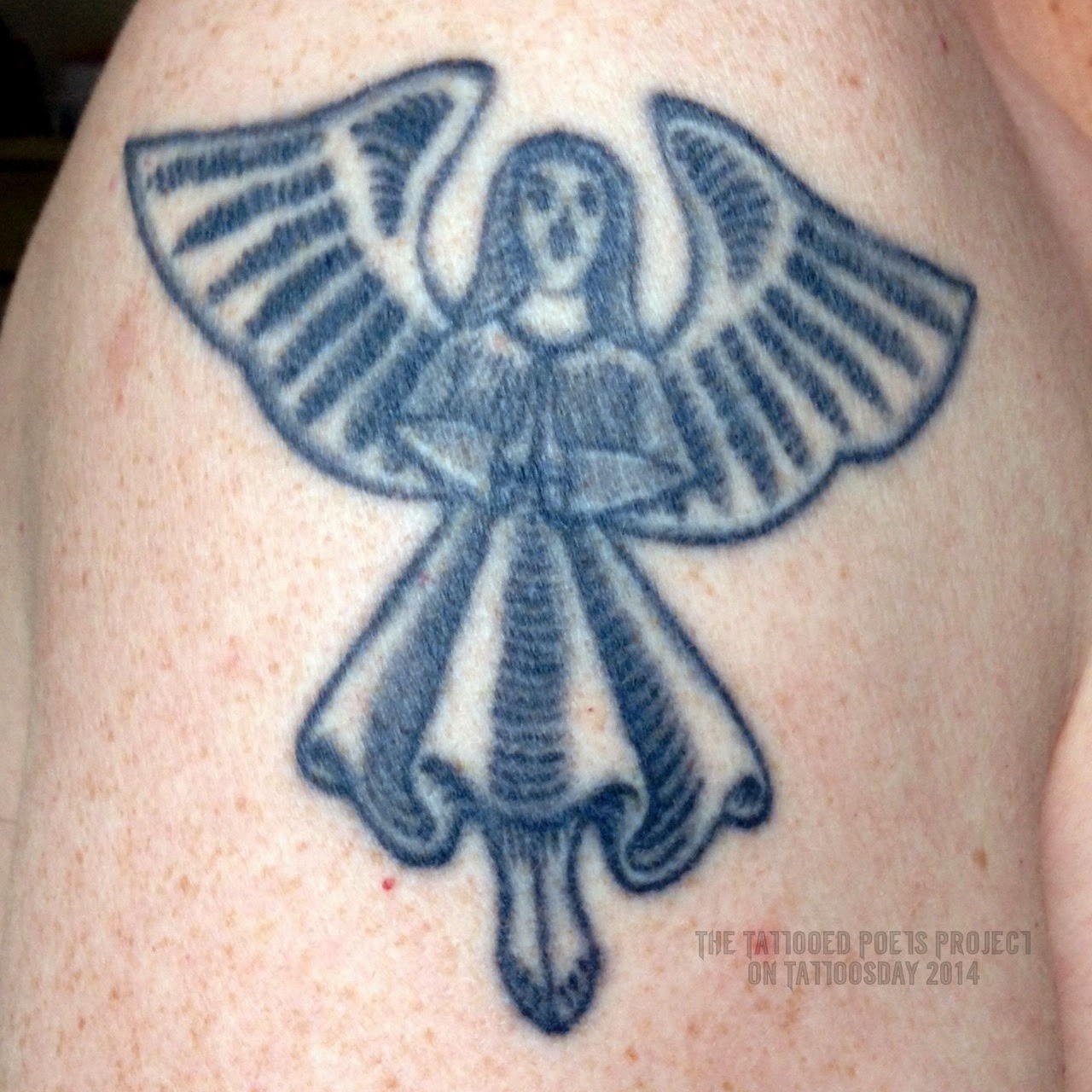 and on his left shoulder is a demon: 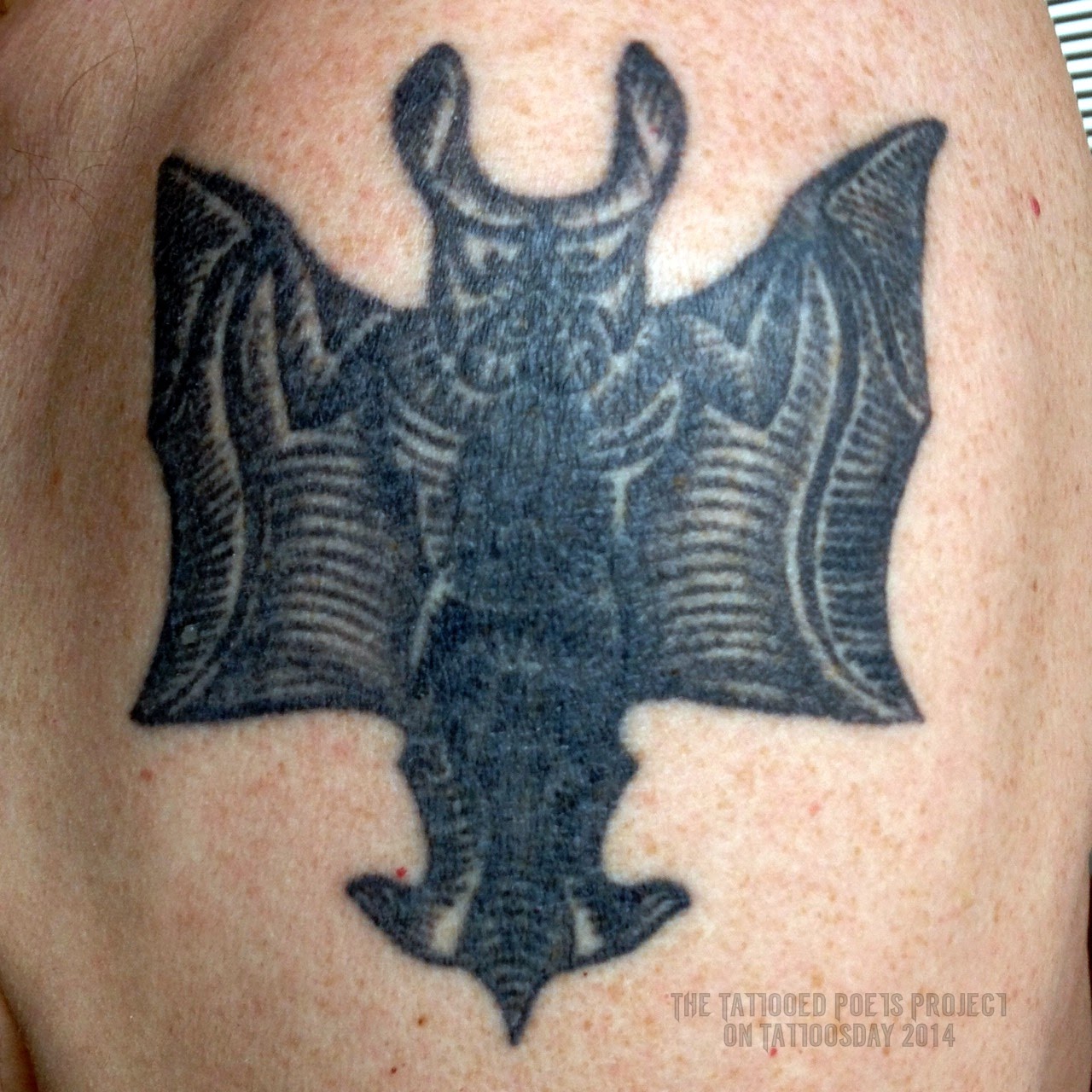 
"Both designs are taken from the same M.C. Escher print. 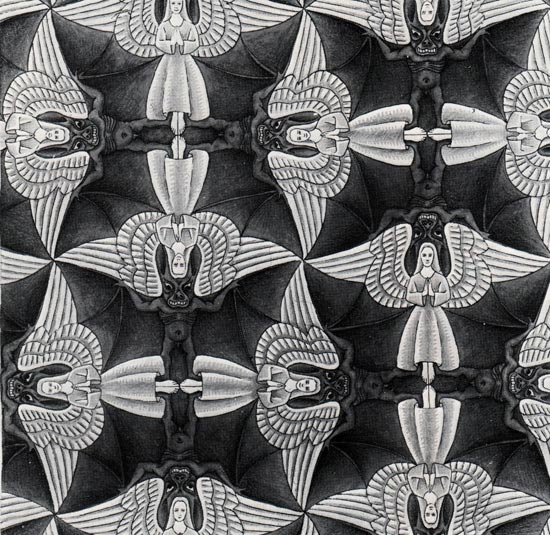 The print was given to me by someone I was once close to, and the angel was inspired by her, and many years later after that person's true nature and dark side came out, I got the demon from the same print. Interestingly, when I got the first one, tattooing was illegal in Milwaukee County, so I had it done at the artist's apartment on the sly. The demon was done years later in a shop."


Paul sent us this poem, which was originally published in South Dakota Review [Spring 2012]. He adds it, "is not related to the tattoos or the person that inspired them, but seems to fit well with them."

There was this woman I once loved, and who may have
loved me in return, whose death came to me in a single
paragraph on the sidebar of page seventeen, section three
of the Sunday Tribune, while I was eating my breakfast
a decade after the last time we’d kissed each other
goodbye. By then she had moved out west for work and I
had married someone else and had two kids, and then she
was offered a better job and returned to live in the Midwest,
and I had begun my path leading toward my ensuing divorce.
We never reunited nor spoke.
There didn’t seem to be a need.
But at one time I thought she would be the one with whom
I woke up next to on gray winter mornings, the falling snow
mixing with the remaining stars, a glittering of the northern
sky that would seem as unreal to us as my then expectations.
We even walked through a small town up north one summer
weekend and looked at homes for sale as if we might buy one.

Now the thought, as unrealistic as our thoughts were back then,
that had we ended up together, had we tried to love one another
even in the face of facts pointing toward obvious conclusions,
that perhaps she would not have been living alone in that city,
and those three men who followed her home that winter night
would not have done to her what they did to her, before crushing
her larynx and leaving with seventeen dollars from her wallet.

So I drove down to northern Illinois to attend her memorial
service, not knowing if I’d be remembered by anyone there,
or if the sight of her closed casket would set off a rush of regret,
or love, or fear, or indifference in the face of grief. And then
the sight of her stooped and broken parents, aged far beyond
my memories of them, and a stunned boyfriend who could not
bear to even enter the room, and bar friends with boozy breath
and red-rimmed eyes telling stories to brace against their own fear
set me running to the parking lot and my car, starting the engine
and driving away, sitting inside the exact opposite of silence,
seeing her face in my mind and trying to remember the sound
of her voice.
But all I could hear on the way back to my home
in Wisconsin was the sound of angels, their great black wings
moving at a frequency just below the surface of all other sound,
their silver voices rising in what she and I would have called
song, but what is to them merely their native tongue, mixed
together with the sound of somebody weeping.

Paul Scot August is originally from Chicago but has spent more than half of his life now in Wisconsin. He has an MA in Creative Writing from UW-Milwaukee and is a former poetry editor of The Cream City Review. He has been nominated three times for a Pushcart Prize. His poetry has appeared or is forthcoming in Stoneboat, Heron Tree, Connotation-Press, Mead: the Magazine of Literature & Libations, Lindenwood Review, Louisville Review, South Dakota Review, Tygerburning, Midwestern Gothic, Los Angeles Review, Dunes Review, Naugatuck River Review, Passages North and elsewhere. His first book is completed and looking for a publisher.

Thanks to Paul for sharing his poem and tattoos with us here on The Tattooed Poets Project on Tattoosday!