Our next Tattooed Poet of the Week is Shauna Osborn, who sent us this image: 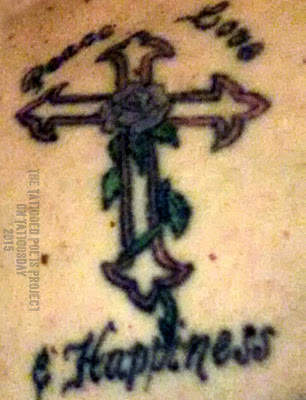 Now, I know readers have been spoiled of late with some exceptional work, but this one has an interesting origin, as Shauna explains:


"This tat may not look like much, but it has a great back story. I’d wanted a tattoo since I was a little kid—I envied my grandpa’s large Navy tats he’d gotten while in the service. Most of my family was square against it, especially since I was female, so I figured it’d be a while after I moved out before I’d get the chance to ink up. I turned eighteen in the spring of ’98, moved out, and started college.

One Saturday a couple months into my first semester, my dad came by the dorms unexpectedly and told me we were going on a road trip. He didn’t tell me what we were doing, or why, just said it was a surprise.

We drove south several hours toward Texas until we hit Wichita Falls. Dad pulled up to Altered Images and said he was getting us both our first tattoos. Tattoo shops were still illegal in Oklahoma at that time, so he’d brought us to the closest shop he’d heard good things about from some coworkers.

He got a bicep tat of the Chevy logo with American flag detailing. Because I wasn't prepared with the designs I'd drawn up I had to go with a piece of flash. I chose this one as an representation of my past and hopes for the future. Allie, an apprenticing female artist, fixed me up with this one and gave my baby sister a temporary tattoo of Timon, Nathan Lane’s character in the Lion King."

Shauna sent us the following poem, which first appeared in Poesis Review #6:

My nocturnal self has left--
lost her somewhere in Oakland
to the blacktop covered roads.

She feared the desert heat
after the coldness of the city.
Feared it’d melt her resolution,
drown out her loudest screech--
replace the hard, coal-pressed hate
that serves as her grounding center
with a dripping puddle of snot.

While I wander the white & painted sand,
she frolics through asphalt & smog,
roams among drag queens & junkies
that ride the waves of Puget Sound--
making love to dreadlocked poet beggars
stealing rides on cable cars &
slicing the leash off every dog she sees
with her dad’s rusty pocketknife.

Scott saw her late last week, flagged her down
from alternate subway platforms, screaming & jumping
like someone slain in the spirit
but the only response he received was a dramatic
turn, her long braided dreads brushing the subway
floor, as she bent in full curtsey
& then a slow-blown kiss
as she walked away.

Shauna Osborn is an artist, wordsmith, and community organizer. Recently, she became Artist in Residence for the 2015 A Room of Her Own Foundation’s Writing Retreat. She is working on a series of indigenous comic books and a book length choreopoem. Her creative work is included in As/Us, Adrienne, Cultural Weekly, Hueso Loco, Poets’ Quarterly, Puerto del Sol, Spiral Orb, Mas Tequila Review, Yellow Medicine Review, and Upstreet. You can find her online at shaunamosborn.wordpress.com.

Thanks to Shauna for her contribution to the Tattooed Poets Project on Tattoosday!

If you are reading this on another web site other than Tattoosday, without attribution, please note that it has been copied without the author's permission and is in violation of copyright laws. Please feel free to visit http://tattoosday.blogspot.com and read our original content. Please let me know if you saw this elsewhere so I contact the webmaster of the offending site and advise them of this violation in their Terms of Use Agreement.
Posted by Tattoosday at 3:05 AM