Welcome to His Nightmare

I was walking up Seventh Avenue, headed back to work, and contemplating the left ankle of a young woman. She had a tattoo of the Black Flag logo (just the bars):

but she was traveling with two friends. I have a harder time approaching people in pairs or groups, for some reason, perhaps because I fear not the rejection of one person but of two or more. Imagine: I approach a person and ask them about their tattoo. Their friend shoots them a "Who is this dork?" look and the tattooed is less likely to be forthcoming about their art. I also don't like to intrude on conversations and/or stop people who are moving. It's a courtesy thing, I guess. Although, if someone is sporting an incredible tattoo, I may suspend these "rules" for a shot of an amazing piece of body art.

So there I was, walking uptown, thinking it will likely not be the day for the Black Flag ankle tattoo, when I spotted a guy leaning up under a scaffolding. He had ear buds in and was reading, but his tattoo was interesting enough that it was worth disregarding those two deterrents.

This is the piece that was on his upper right arm: 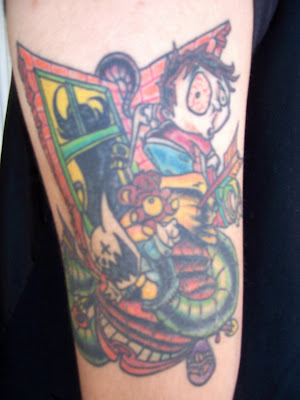 Now, wouldn't you say that's fairly unusual? I just had to get to the bottom of this one. Before you continue, click the photo to see it in greater detail. It blurs a little, but you get a better idea of the full piece.

This tattoo resides on a guy named Losie, a resident of New Jersey. I introduced myself and he was very receptive, removing his ear buds and speaking very openly about his tattoo. This was his second tattoo (more on #1 later). It originated from his finding the art of Greg Simkins online at his website IMSCARED.com. The tattoo was then inked by Damion Ross at New York Adorned in the East Village.

So why did he choose this artwork for himself? "It reminded me of having nightmares when I was a kid," Losie related, "The kid is me." 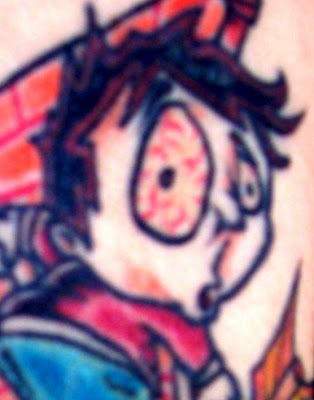 Greg Simkins seems like a perfect match, then, for Losie's nightmare motif. If you look at his site, you can peruse dozens of his paintings, sketches, and drawings and they all resonate with a sense of the macabre, depicting spectacular, colorful visions of an imaginary world in which rabbits are terrifying and inanimate objects come to life.

Losie definitely has a fascination along the same lines, and indicated that he would eventually like to have an entire sleeve dedicated to the horror genre.

The kid in the tattoo is having a nightmare, he is on his bed. The headboard appears as rows of teeth, things are crawling in through the window and from under the bed. Even his pillow is terrifying: 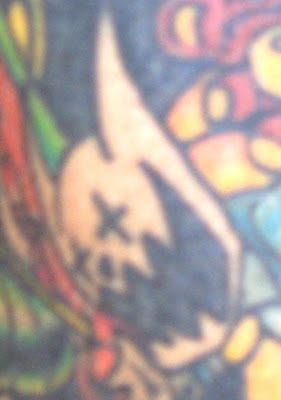 I asked him about the tattoo on his other arm, he indicated it was done at a shop in Burbank, California, where he had lived for a couple of years.

The tattoo is the logo for the band Coheed and Cambria. 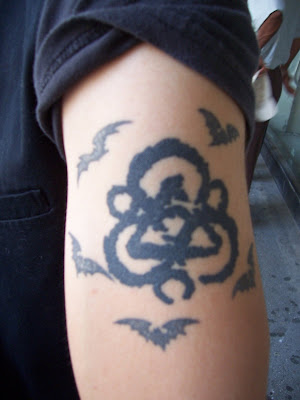 Interesting, I was following a Black Flag tattoo and found a Coheed & Cambria one instead. Losie explained the bats around the logo as a reference to an ex-girlfriend. He elaborated, "Her name was Jamie, so I added five bats, because Jamie has five letters in her name."

He then directed me back to the first tattoo: 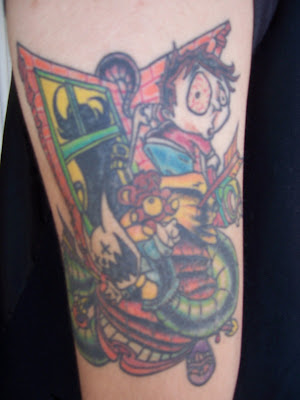 "See the purple skull coming out from under the bed?" 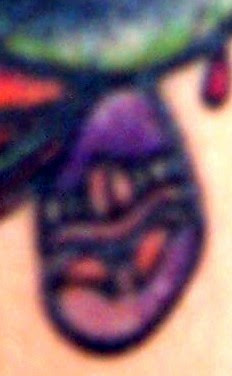 "That's for my ex-girlfriend Violet."

Do note, all quotes are approximate and may not be 100% accurate. I took notes but did not write down exact statements. The messages, however, are accurate.

Losie did allude to a third tattoo, on his stomach, but we didn't discuss the exact location, or what the piece consisted of.

Thanks again to Losie for his participation!
Posted by Tattoosday at 11:53 PM