Faces Staring Out at Me

Confounded by poor timing and fluctuating temperatures, I have slumped lately getting new material up here. However, I sense a shift in the tide, and have this latest encounter to relate, with photos to boot.

It was turning a little chilly on a Friday afternoon when I walked by a guy eating his lunch on the plaza outside of the Borders above Penn Station. This has been a bread and butter spot for me: plenty of sun and people not in a hurry to go anywhere fast.

I noticed he had ink on his neck but I couldn’t tell what it was and it looked interesting. Turns out, this was Brian Murphy, a tattooist from Pennsylvania who is doing a guest artist gig from April 10-13, 2008 at Paul Booth’s Last Rites “Tattoo Theatre” nearby. Brian works out of Third Dimension Tattoo in Marshalls Creek (in the Poconos, north of Philadelphia in the Eastern end of the state).

First a production note: people are always giving me advice on where to find tattoos. “Go to shops,” they say, “hang out in front and get people as they are coming and going.” Great idea, really, but not in the spirit of Tattoosday. A lot of the fun is meeting people by chance and interesting them in the blog enough for them to want to contribute. Going to a shop and asking people about their tattoos seems a little easy. Not to knock the idea, but it takes some of the fun out of it. Similarly, I wouldn’t want to bother an artist in shop with my little venture. But to find one randomly on the street. That’s good fortune shining down on Tattoosday, especially when the individual is as friendly as Brian Murphy is.

Brian offered me two pieces, the more recent ones on his corporeal tapestry. First up is this amazing piece by Kyle Cotterman on Brian’s inner left biceps: 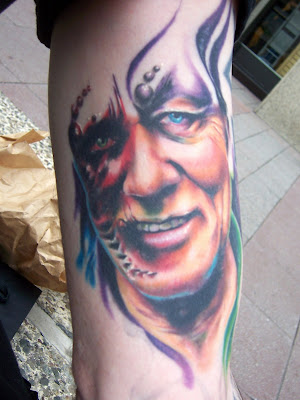 Brian said that Kyle, who is a friend of his, gave him this tattoo in exchange for one from Brian. The image is that of a homeless man. It represents a life that Brian once had, when he was homeless for a brief time. He is no longer in that situation, so the dichotomy of the piece lies in the half that represents the past, as it is disintegrating, and falling away from the foreground, where the new self is represented. The present and future are represented by the expression in the face, showing happiness of getting one’s life back. I’ve asked Brian to ask Kyle for a photo of the piece that he received in exchange for inking this one on Brian. They would certainly be interesting to see together.

Brian also wanted to show me a piece on his left leg designed and tattooed by the world-renowned artist Robert Hernandez, who works out of Vittamin Tattoo Studio in Madrid. 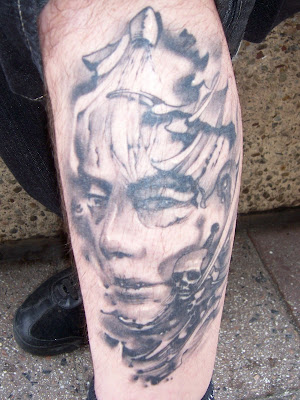 There’s no significance to it, he told me, “that’s just what he does”. Indeed, an amazing piece.

Brian also told me about a cool tattoo site called TattooNow.com, which I have added to the blogroll.

Thanks to Brian for sharing these two amazing pieces with Tattoosday!

Posted by Tattoosday at 9:48 PM