When I went to my wife Melanie's twentieth high school reunion last weekend, I wasn't expecting to come away with a story and a photo for Tattoosday.

In fact, as I had to arrive a little late, Melanie had the camera with her, so I was only travelling with a few fliers, just in case I ran into a tattoo or two en route to the Upper West Side. It's usually when I have no fliers that I wish I'd had the foresight to bring them.

I arrived an hour late, and so was a bit behind the curve on introductions. I recognized names on name tags, but there were also many people untagged. And when the call came out for the reunion class to assemble for a photo, I was left behind with a trio of women. "Spouses?" I asked. Close. One spouse, one fiancée, one girlfriend.

I chatted with them for a bit while we waited for the alumni to return. The fiancée was talking to one of the other women about the tattoo on her wrist. The class returned and Melanie came over and commented, "Oh, you should get her picture," or something like that. There was a quizzical look. I introduced Tattoosday. And here we have the unusual tattoo: 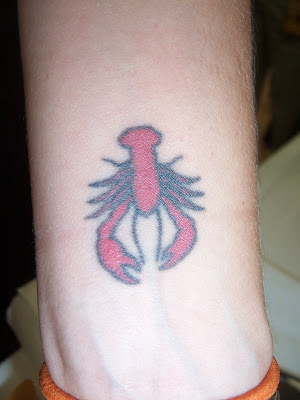 Yes, Katherine Pushkar has a tattoo of a lobster on the inside of her forearm, just below the wrist. It was inked circa 2000 in one of the many lower East Side tattoo shops, the name of which, along with the tattooist, is lost to memory.

As she tells it, the editorial job oversaw, among other things, the food critic. She occasionally would go out to dinner with the reviewer and the menu would inevitably feature seafood. The problem was, Katherine didn't like and didn't eat seafood.

Now I am totally with her on this. Aside from tuna salad, I abhored seafood growing up. And I grew up in Hawai'i. Even now I admit that I missed out due to my pickiness. I have gradually evolved into the occasional sushi eater, a taster of Melanie's dishes, but I still largely remain a non-seafood kind of guy.

Katherine, on the other hand, understood that her distaste for creatures of the sea was an issue she had to deal with and so she took the plunge.

She realized she needed to learn to like seafood and she chose to take the first step in Nantucket and ate her first lobster. The rest is history. From that point on, she no longer suffered from the menu laden with fish dishes.

Fast forward to a tattoo shop in the East Village. She and her friend were getting their first tattoos. Her friend was the driving force, looking to get a lower back tattoo. Her friend was set but Katherine was still trying to decide what was best.

Still proud of her expansion of her palate's horizons, she explained the concept to the tattooist who found the lobster in a book of flash art. The rest is history. 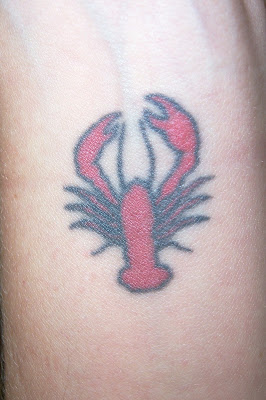 And, Katherine concluded, while her friend's affection for her back tattoo has waned over the years, she still wears her lobster ink proudly on her wrist. It serves as a constant reminder, Katherine beamed, that "I can change if I want to."

Thanks to Katherine for her sharing this story, along with her tattoo!
Posted by Tattoosday at 5:39 AM