Chalk it Up to Teenage Angst

Sunday morning I was leaving Rite-Aid when a woman walked in. She had several visible tattoos so I turned around and walked back into the store. I introduced myself, Tattoosday, etc., and Courtney was happy to share her tattoo stories with me, offering up one of her seven tattoos: 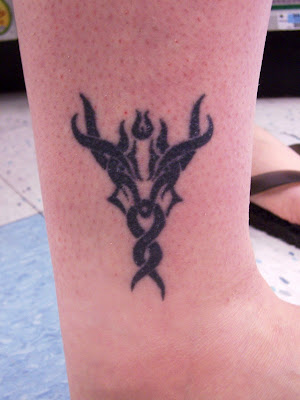 All of her work is in black and gray. This piece is a tribal design, and is Satanic in origin. Courtney explained. She was a lapsed Roman Catholic who became involved in the Church of Satan. This piece is about 5 years old and was inked by Richie at Tattooing by Richie in Elmont, Long Island.

Incidentally, Courtney is no longer affiliated with that lifestyle and has returned to the Catholic Church. She says she was going through a phase and was experiencing teenage angst. 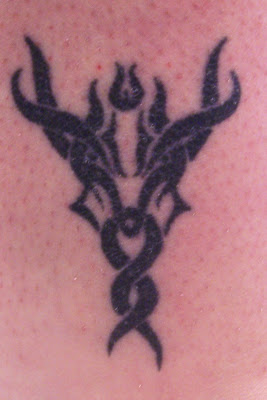 I had a nice chat with her about tattoos and how she is finding it challenging because she has a corporate job now, and finding attire that covers her ink appropriately can be tough. This almost limits her in her choice to get any more work done.

From what I can recall from our conversation and from seeing what was visible, she has three or four pieces in all on her legs, a tribal design on the lower part of her neck, an ankh on her lower back, and another piece on her right biceps. She did not show the biceps or lower back tattoos.

I explained to Courtney my policy is generally not to ask people, who are generally women, if I can photograph their lower backs. If they offer (like this woman did), I will snap away.

Thanks to Courtney for being so cool, talking tattoos with me, and sharing her Satanic piece with Tattoosday! Here's hoping she'll make a return visit here in the future!
Posted by Tattoosday at 11:36 PM