A Series of Nautical Stars Guide Me to an Amazing Tattoo

I've said it before and I'll say it again: sometimes asking about a common tattoo reaps great visual rewards.

Carrie is a prime example. I spotted her nautical stars gracing her right arm near 39th Street and Broadway and I asked her about them. Had she only had one, I may have passed her by, but she had five running up the length of her inner arm, and I had to ask.

Well, like this tattoo, I knew when Carrie stood up from the chair on which she was sitting, that I would be seeing something more interesting than stars. And, well, let's say she took my breath away on Broadway: 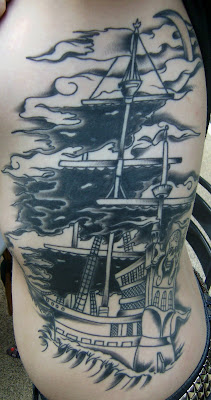 This reminded me of this windjammer tattoo, but Carrie, who has always loved pirates, and is going to have this colored in at some point, specified that this is a pirate ship.

The detail is incredible: 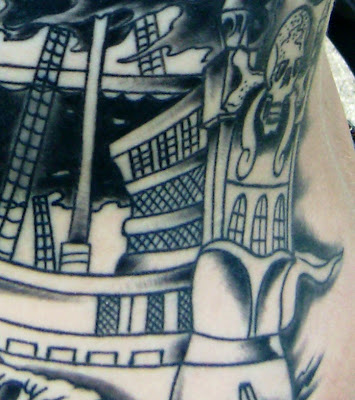 and Carrie was particularly happy that the moon came out in the photo: 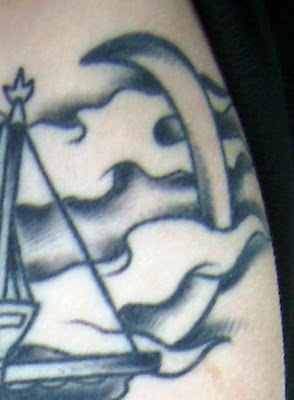 The brilliant piece was inked by Charles "Chuck" Denise at Revolver Tattoo in New Brunswick, New Jersey. Carrie told me he was voted one of the top 10 tattooists in the country. The stars were done at Philadelphia Eddie's Tattoo Haven by Topper in Philadelphia.

Thanks to Carrie for sharing her awesome ship on Tattoosday (and for being confident enough to reveal so much in the middle of Broadway). She works in the same building where I have a regular Friday meeting, so I hope to feature progress on her work in the future. She also mentioned that her boyfriend has some cool ink too, so we may see some from him as well in the months to come.
Posted by Tattoosday at 9:00 AM

This is a tattoo appreciation blog. I have posted work here that I don't necessarily think meets the standards of the "elite" in the tattoo community, but this blog isn't about posting great tattoos.

If it is "fascist" for me to be "censoring" comments that I feel lack constructive feedback, it is my right to do so.

If the poster of the comment had merely disagreed that it was not an amazing tattoo, that would be one thing. But s/he used objectionable language that I felt was inappropriate for this forum.

In over a year of this blog's existence, this was the first blatantly negative comment I have removed.

In addition, the fact that the comment was posted by "Anonymous," indicates to me that the person posting is not comfortable with associating his or her negative remarks with his or her identity.

If you wish to be negative about a person's choice of tattoos, there are countless other blogs that I am sure would accommodate you.

Again, this blog is about appreciating tattoos and the stories behind them. If you do not appreciate the work featured, move on and find something that suits your taste better.

I am the original poster of the "negative" comment.. I am going to reword my post to be more constructive.... OK, so, I have nothing against people with ship tattoos. In fact, I think they can be done very well. This, in my opinion is not one of them. The sails are not shaded properly and are backwards, making the ship look like it is parallel parking on this person's ribs. This does not make any sense. The "detail"-ed lines are far too thick to really be considered "details." The fact that you had to ask the tattooed person what kind of ship it is, (a pirate ship) is proof alone that it is an inaccurate/unclear rendering. If this blog isn't about posting great tattoos then maybe you should think twice about endorsing artists who obviously still have a lot to learn about drawing... Who exactly rated this guy top 10 of the US? Don't you find THAT offensive to those who spent enough time studying/drawing/painting/tattooing to know how to render a ship correctly? Once again, this is not an attack on why someone would get a ship tattoo... This is about the poor execution from an artist you are claiming to be one of America's best... By the way.. I choose to be anonymous because I don't feel like filling out whatever profile is necessary.... The nautical stars look clean, though :-)

Well, that's certainly more constructive than your original one, and I don't want to appear "fascist," so I'm not going to delete it.

However, I will disagree. I can see the heaviness of the line work of which you complain, but that doesn't bother me, aesthetically. As for the other issues, the reversing of the sails, the orientation, etc., I either just don't see it, or it doesn't bother me.

Everyone I have shown this to, and I, myself, think it's an amazing tattoo. If that somehow confirms for some that I have questionable taste, whatever. I stated above that I don't necessarily post the best tattoos, but their stories are often interesting enough to make them, in my opinion, blogworthy.

You also seem to have a huge objection to the artist being referred to as one of the ten best. I never claimed he was in that group. In fact, I was careful to state: "Carrie told me he was voted one of the top 10 tattooists in the country".

I was unable to validate that which is why I said "Carrie told me..." I would never claim someone is that great without having a thorough knowledge of their work, and I am in no ways a subject-matter expert when it comes to the talent of the tattoo community.

Not to mention that, even if say Skin & Ink Magazine posted a Top Ten list of U.S. tattooists, I'm sure there would be objections to the inclusion of some and omission of others.

Thank you for sharing your opinion. I disagree but, you are certainly entitled to feel the way that you do.

"Again, this blog is about appreciating tattoos and the stories behind them."
"I stated above that I don't necessarily post the best tattoos, but their stories are often interesting enough to make them, in my opinion, blogworthy."

Your lack of anecdotal evidence for said claims are lacking. All I read is where you saw her, the "awesome" work she has, and where she got the tattoo. Not much of a story there...
Even is "Carrie said" is on there, by posting the very statement you are endorsing and giving merit to what she says..

PS- Even Skin & Ink Mag (which is marketed toward the general public rather than the tattoo community) is too smart to post a top 10 list of tattoo artists...

Well. Then I guess you are absolutely right, and I am absolutely wrong. Or,
I just don't feel like arguing anymore about a matter of personal opinion.
I guess this blog is just not for you. Have a great day.

i also asked the artist to make the ship leaving as leaving the port.... it's different, i wanted that and i love that. most pirate ships you have the front end of the ship and that is the art i wanted it to be the back end of the ship. that was my design. this isn't any particular ship it's just a ship i found and fell in love with, therefore i have it tattooed on my ribbles.

my personal opinion is i think this work of art is amazing...i should, it's on my body. my artist is amazing and the detail is extraordinary. it's not for everyone and i respect all opinions.

id like to point out 2 things about this tattoo.

1 the sails are black. not shaded.

2 the focus is of the BACK of the ship. so the sails are blowing correctly.