Just a brief note...despite the Tattooed Poets Project for National Poetry Month, I still plan on spotting ink on the streets of New York, and posting it here.

Back on April 1, I spotted a very distinct-looking individual at the Amtrak terminal in Penn Station. It's a great inkspotting locale, as people are usually standing (or sitting) around, waiting. Those folks are more amenable to chatting about their tattoos than their counterparts who are rushing for the train, or are running back from lunch.

I mention that he was distinct looking, because he stood out in the normally conservative Amtrak crowd. He looked the part: performing under the name Abbey Nex, the gentleman was headed back to Baltimore after a tour of Europe with his band, Psyclon Nine. He primarily plays bass for the band, although Psyclon Nine's MySpace page credits him with broken mirrors and scabbed knees, as well. The band is classified as metal/black metal/industrial.

Abbey Nex has ten tattoos in all, but we decided to share the one that I saw first, an old Jack Skellington piece that his friend Emily did about 8 years ago on his inner left forearm: 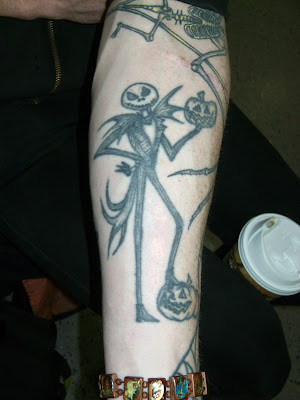 Nightmare Before Christmas tattoos are among the more popular movie-themed pieces in our society, primarily because the stop-action animation classic has such a huge following, but also because the main characters make such great designs for big tattoo pieces. He also has one of Jack's girlfriend Sally on his inner right bicep.

Abbey admits that he has come to regret this piece a bit, having outgrown it to some extent. However, he plans to alter it to bring it more in line with his aesthetic sensibilities. The plan is to leave the majority of the tattoo intact, but to replace Jack's trademark head with a less childish,
more macabre and elongated animal skull. The piece directly above the Skellington tattoo is an elaborate bat skeleton.

I want to thank Abbey Nex for sharing his tattoo with us here on Tattoosday, and for giving me a pen, liberated from the Four Seasons Hotel in Dublin, since I ventured out lacking a writing instrument to scribble my notes.

Here's a video of the band's song "Parasitic":