The Lovely Tattoo of Legs Malone

I couldn't help notice the striking woman standing on the subway platform waiting for the R train. She was tall, had long shapely legs, a close-shaven head, and a small tattoo on the back of her left calf.

The R pulled in and, as luck would have it, we sat down next to one another on the train.

I had to introduce myself.

Turns out, I was sitting with a burlesque performer named with the stage name Legs Malone.

We didn't have a lot of time to talk, as she was exiting the train a stop or two earlier than me, but she obliged me for a photo by taking my camera and shooting the tattoo on the back of her leg: 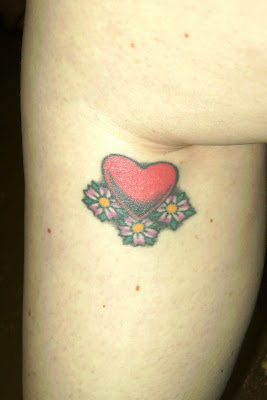 She told me that this small tattoo (the only one visible on her frame) was inspired by a heart-shaped bruise that she wanted to replicate on her skin, but in a more aesthetically-pleasing way. The flowers around the heart are cherry blossoms. 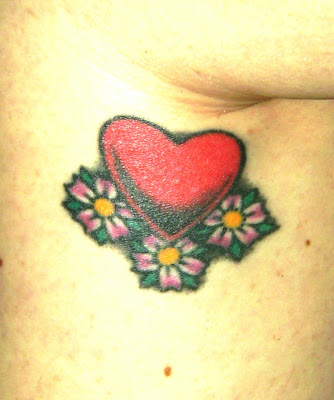 The tattoo was inked at Fly Rite Studio by Charlie Foos, who is now at Read Street Tattoo Parlour in Baltimore. Charlie's work most recently appeared on Tattoosday here.

Thanks to Legs Malone for sharing her tattoo with us here on Tattoosday!
Posted by Tattoosday at 7:29 AM