Two for Tattoosday: A Purple Lotus and the Fletcher House

In keeping with the spirit of duality, today's post is a two-for-Tattoosday Tuesday special.

Yesterday outside of Madison Square Garden, amid throngs of Iron Maiden and Dream Theater fans, I met two guys who just happened to be there. If you want to see a great Maiden tattoo, look back in the archives here.

I met Roman, who conceived and performs in "Evolution," showing Tuesday, July 13, and Tuesday, July 20, at the Magnet Theater (254 W. 29th Street between 7th and 8th Avenues). With him was Louie, who directs the show which is billed as "international and comedic true stories intertwining spirituality, sex, laws, identity, drug vusts, discomfort, fear and discovery from a spontaneous road trip down south".

Roman shared first, which seemed only fair, as it was his tattoo I noticed,creeping out from under his left sleeve: 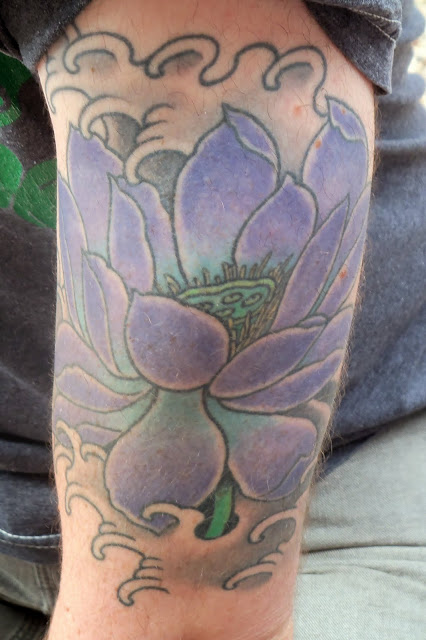 He got this purple lotus because he likes the color purple (the actual color more than the movie of the same name). And the lotus is special because, in Buddhism, he understands the lotus to symbolize "freedom of attachment and desire". 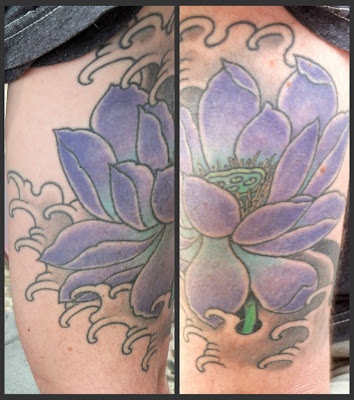 This tattoo took 3 to 4 hours and was inked by David Sena when he was at Rising Dragon when they were at their 23rd Street location, although Sena is now at North Star Tattoo, the shop he co-founded in the East Village.

Louie's tattoo was much smaller, but it had a more elaborate story: 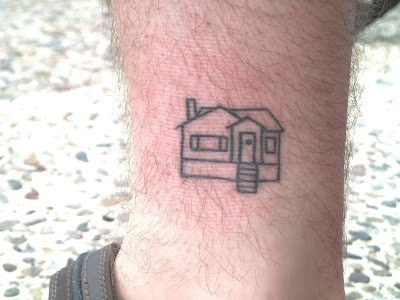 This small design, on the outer left ankle of, represents a house in Vancouver, British Columbia, in which he and seven different people lived at different times during their college days. The house and the memories they all shared together there are so important, that Louie and six other friends share the same tattoo.

The narrative took on a more elaborate spin, as Louie explained that his group of friends came up with a family name to represent the denizens of this house. They were/still are "the Fletchers," all residing in the Fletcher House. He likened them to an extended family like The Ramones, and they chose the name because it sounded tough.

So, as Louie a.k.a. "Rock" Fletcher tells it, his friend "Slim" Fletcher drew up the simple design for the house tattoo, and they had it inked at Addiction Ink NYC. Over the years, when one of the Fletcher family came to town, they went down to the shop to have the family member tattooed with the same design, not necessarily on the ankle, like Louie/Rock.

It should be noted that Kim Fletcher, who is a relatively new mom (congrats Kim), has avoided the tattoo, so the rest of her Fletcher family created a needlepoint design of the house for her, so that she has the tattoo in a different shape and form, needled, but not in her flesh. Yet. Now that it is written here, forever on the pages of Tattoosday, it is only a matter of time. Kim Fletcher, you destiny is calling.

Thanks again to both Roman and Louie for sharing their tattoos with us here on Tattoosday! Be sure to catch their play "Evolution" at the Magnet. If you show up at the box office and mention this post, you won't get any kind of discount, but I'm sure that they'll be thrilled to hear that you showed up as a result of their contribution here!
Posted by Tattoosday at 6:43 AM