Last fall, I met Orlando near F.I.T. and posted some of his tattoos in December. I had wanted to get clearer photos, but I hadn't been able to contact him, so his work appeared here, in an end-of-the-year recap.

Fast forward to a month ago, when I spotted Orlando again on the corner where I work, so I was able to get a clearer photo of one of his tattoos, and obtain something new from him.

I was waiting until this week to post the picture, to coincide with Pride Week here in New York City. 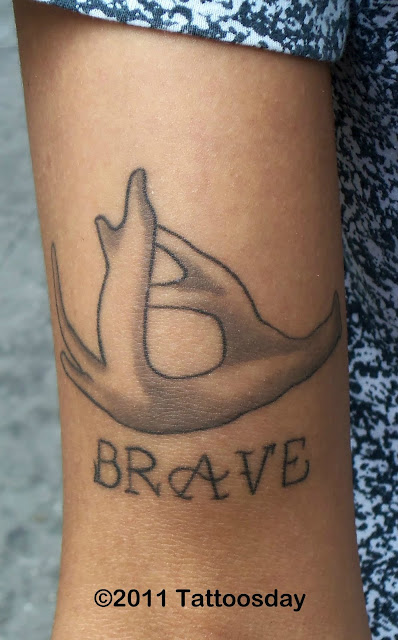 Orlando explained that these are antlers and he got them for a specific reason:


"I got it last year when I was 19 ... antlers, for the animals who have them, are a symbol of strength and sexuality ... I came out when I was 13, so last year that would have been six years ago. So I got it just to commemorate me coming out, and I got "BRAVE" underneath it for it being the bravest thing I've ever had to do."

I wanted to share this during Pride Week as a tribute to Orlando's bravery, and with the hope that it helps instill courage in other people to be proud of who they are, and to not be ashamed of their true selves. I don't often get up on a soapbox here on Tattoosday, so I'll spare you the rhetoric, Dear Readers. Nonetheless, I want to thank Orlando for his bravery and his willingness to share a bit of his journey with us here on Tattoosday.
Orlando credited Chantal at Bleeding Image Tattoo in Astoria, Queens, with this tattoo.
This entry is ©2011 Tattoosday.
If you are reading this on another web site other than Tattoosday, without attribution, please note that it has been copied without the author's permission and is in violation of copyright laws. Please feel free to visit http://tattoosday.blogspot.com and read our original content. Please let me know if you saw this elsewhere so I contact the webmaster of the offending site and advise them of this violation in their Terms of Use Agreement.
Posted by Tattoosday at 6:18 AM