Here at Tattoosday, I am saddened to report that my friend David passed away yesterday. David was a true friend, and was one of the earliest contributors to Tattoosday, sharing his one tattoo for Tattoosday's 12th post, after launching in 2007. That was one thousand eight hundred and eleven posts ago.

It is bittersweet sharing this post, because David's tattoo was a celebration of his conquering cancer. Alas, another more aggressive form returned recently and dispatched one of the toughest, funniest, and most caring people I've had the pleasure of knowing.

Here's to you, David. I'm reposting your ink and letting you know I will never forget you.

My friend and co-worker David McDermott survived a bout with Hodgkin's Lymphoma many years ago and, as a gift to himself, got the following tattoo: 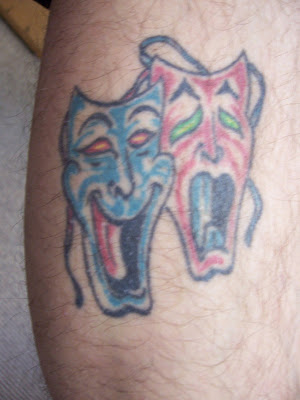 After he successfully completed chemotherapy and radiation, and survived this scare (I still sport a yellow "LIVESTRONG" wristband in honor of him, despite the fact that they are "out of style"), he felt that the metaphor of the comedy and tragedy masks best represented his struggle.

To him, the tattoo represents life. It is a badge of survival, and a reminder of the importance of humor in the face of the most dire of circumstances. I was only on the sidelines when David struggled. But through it all, he managed to maintain a strong sense of comedy. His sense of humor took a beating, but it never gave up, and it sustained him and let him remain positive. He acknowledges that that attitude had a place in the battle for his life.

The tattoo is discreetly located on his left calf. I say discreetly, because David is not one to wear shorts. I have always seen him in slacks or jeans, but never shorts.

He doesn't recall specifically where he had this inked, other than a shop in SoHo.

Thanks, David, for sharing your tattoo!


If you are seeing this on another website other than Tattoosday, without attribution, please note that it has been copied without the author's permission and is in violation of copyright laws. Please feel free to visit http://tattoosday.blogspot.com and read our original content. Please let me know if you saw this elsewhere so I contact the webmaster of the offending site and advise them of this violation in their Terms of Use Agreement.
Posted by Tattoosday at 11:20 AM