A is for Avocado (The Alphabet Game, 2018 Edition)

As explained in our introductory post here, I had so much fun with last year's Alphabet Game, I attempted it again last month.

I'll be honest, I'm not super confident, so my goal is to just go one better than last year, so if I make it to the S (Shuttle) train, I will be happy.

I know it's all about momentum and being efficient, but I'm still a little concerned that I can pull it off. A big stumbling block last year was the D train and going all the way out to Coney Island and back.

8:12 AM, great train luck, one stop to Fulton and an A is pulling in at the bottom of the stairs on the A/C platform. Already headed north.

8:21 AM, switched cars at 14th Street. The first is always the hardest. I don't want to stray too far, so I am planning on switching to a downtown A at 59th Street. It's the economy, stupid.

8:26 AM, Switched cars again at 42nd Street, preparing to switch again at 59th, this time headed back downtown. I had a better start last year :-( 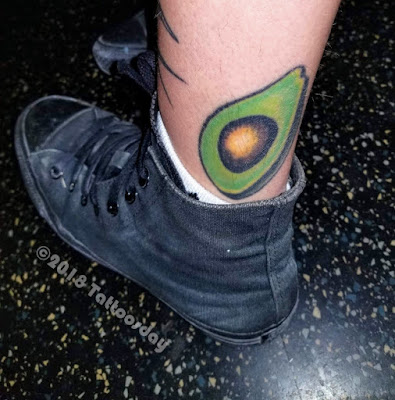 It was a quick picture and a quick conversation. The tattoo is from an unremembered artist at New York Adorned. Adorned was one of the top shops in the city, but they stopped tattooing operations in July of this year, rebranding and focusing solely on piercing.

The first letter of the alphabet has been accomplished, appropriately with an Avocado.

Staying on the A train to switch for a B at 59th Street.

Thanks to Jill for sharing her tattoo and getting us started!

If you are seeing this on another website other than Tattoosday, without attribution, please note that it has been copied without the author's permission and is in violation of copyright laws. Please feel free to visit http://tattoosday.blogspot.com and read our original content. Please let me know if you saw this elsewhere so I contact the webmaster of the offending site and advise them of this violation in their Terms of Use Agreement.
Posted by Tattoosday at 6:45 AM