I ran into Cathy at our local Rite Aid store where she was working replenishing the greeting cards stock.

Her short sleeves allowed her to more than adequately show off two tattoos on her upper arms. The first I saw was this astrological depiction of her birth sign: 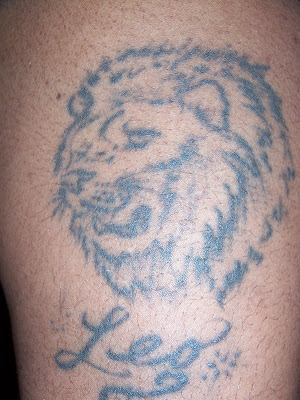 That was, in fact, her first tattoo, inked back in 1993 at a shop in Philadelphia. No real explanation necessary. She is a Leo and wanted her sign depicted on her biceps. Leo was on the left.

Cathy has 8 tattoos in all. She has two on the upper part of her chest, 3 on her lower back and behind, and 1 below her navel along the waistline.

The tattoos on her chest were inked in London, and the one on her waistline was the only New York City tattoo.

The three on her lower back and the one on her right biceps were done at the same shop in Ocean Grove, New Jersey. She cannot recall the names of any of the shops or artists who tattooed her.

The one on her right biceps she's not completely happy with: 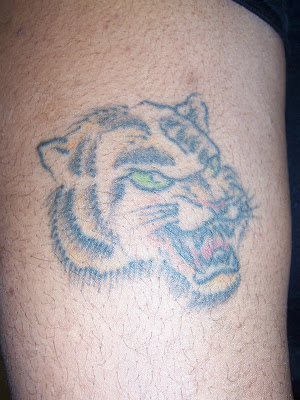 "It was supposed to be a female lion," she said, to go with the Leo, but it didn't come out quite right. She loves lions and other big cats.

She laughed and said, now that she thinks about it, she got the lioness on her right arm "the same time as I got my husband's name on my butt."

I did not ask about all of the tattoos that were completely covered. The tattoos on her chest are florals. She did say she would try to send me photos of the others.

Thanks again to Cathy again for sharing her lions here on Tattoosday!
Posted by Tattoosday at 9:35 AM