Tattoos I Know: Brooke's Back

Readers of Tattoosday may already be familiar with Brooke from her first appearance here, showing off her courage.

Well, she's back. Literally. The other day I spotted her wearing a sweater over a halter-top, so I thought I'd invite her back to show off her previously alluded-to koi.

From a distance, they look like wings, or perhaps even eyes: 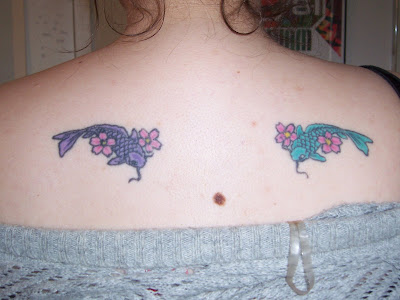 But a closer examination reveals that they are two koi. For more on koi, jump here and follow the links.

Just to recap, Brooke is from Utah and currently lives in Hoboken.

Her first koi was inked on the right side of her back in May 2005. She was in Boise, Idaho, at the time, reeling from the end of a ten-year relationship. She was in a watering hole called Bittercreek Alehouse where, she estimates, she consumed a pitcher of mojitos. It was decided that a tattoo was on the menu for the evening so she headed over to 6th Street Studio in downtown Boise.

Brooke had heard the expression "bleeding out" when people had gone through the tattoo process. Rather than the threateningly negative meaning the phrase may have in the medical community, or the technical expression of flawed inking, Brooke understands the expression to reflect the fact that many people find the pain and the minimal blood shed of the tattoo process to be redemptive and healing.

Brooke spent time looking through books and found a design she liked, a traditional koi with a background of cherry blossom petals and waves. However, when working with John the artist, she had him enlarge the koi, brighten its color, and remove the background elements. 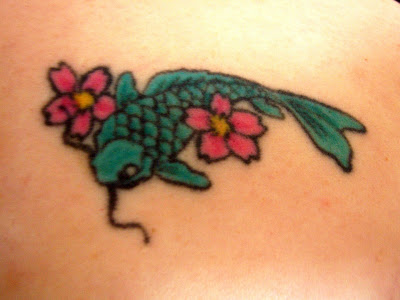 To her, the koi on her back symbolized moving past the ended relationship into a new chapter of her life.

Flash forward to December, seven months later, she was headed back to Boise. There was a celebrity event she wanted to attend with her friends, at which adult film director/producer/star Ron Jeremy was the main attraction. She met him at the event and the next night, was back at Bittercreek, enjoying their mojitos.

She headed back to 6th Street Studio and had John even out her back, placing another koi on the left side, facing the other. 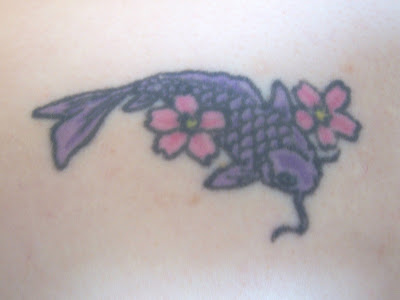 The symmetry brought a nice balance to the ink on her back. John also gave a little touch-up to the original koi on her right side.

And here's a Tattoosday first: Brooke has provided pictures from the shop as she was getting the second koi: 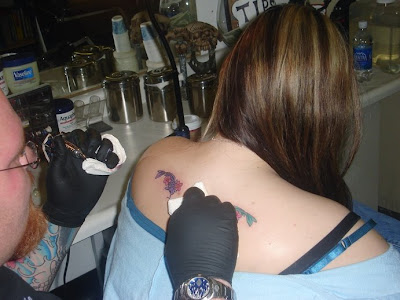 And here's a photo with Brooke and Chris, the artist at 6th Street Studio: 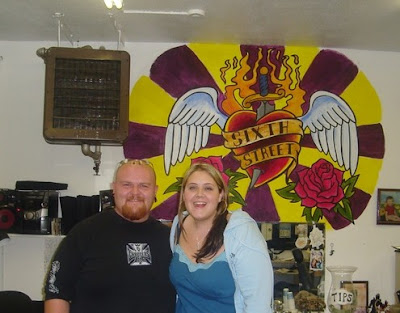 Brooke loves her koi, which people often mistake for wings from afar. However, he finds them symbolic of her perseverance and courage.

There are many stories about koi and their significance in body art. One legend is that, when koi swim upstream and reach the source of the river, they transform into dragons. Brooke sees parallels to this in her own life, having swum away from home and reached the East Coast. She is not a dragon, but feels that her tattoos represent her transformation here in the New York City area.

Thanks gain to Brooke for sharing her ink and the great back story (no pun intended) behind these and the prior tattoo here. Next time you drink mojitos, think of koi and good fortune!
Posted by Tattoosday at 10:30 PM

Thanks for the great story. It sure brings back memories as I was the one that was with Brooke when she got her tatoos and I also helped her drink the mojitos. We were just at BitterCreek last month enjoying several pitchers of mojitos and talking about tatoos. I sure miss my Hot Karl. Please drink a mojito with her for me.