I was sitting in my local coffee establishment Sunday morning when I overheard some words that got my attention. Among the words uttered were “traditional,” “sleeve,” and “work”. I looked up to see a guy talking to the barista. He had a tattoo on his wrist. I waited until he was done talking to the guy behind the counter and spoke up when he walked by.

His name is Omar and he has two tattoos, both on his inner right forearm: 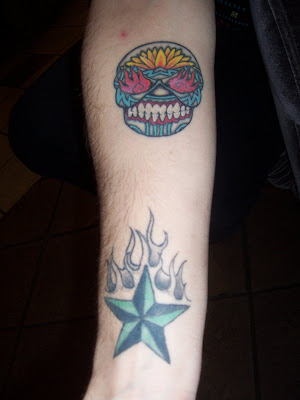 His first one is the nautical star, definitely a traditional piece: 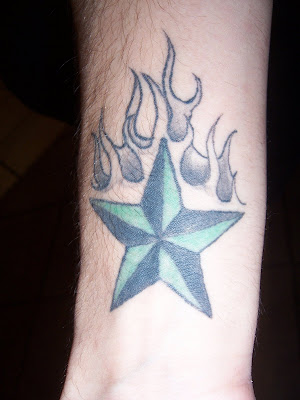 He explained that, as he understood it, the nautical star tattoo is a common piece that represents a star guiding a sailor home on the right path. He had flames added to symbolize change, as it so often does in tattooing.

This was not inked at any shop, but by one of Omar's friends who is just learning the art of the tattoo. He pointed out that the line work was not perfect, but I wouldn't have noticed it without a harder glance.

The second piece is a traditional sugar skull, very similar to the one that appeared in Tattoosday's "Rad Tattoo from Nebraska" post: 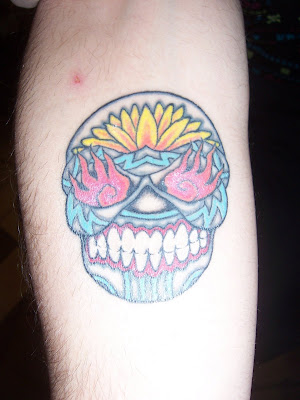 Omar had first gone into Brooklyn Ink and discussed his second tattoo it was there that the artist recommended that he should stay traditional to be consistent with the nautical star.

He ended up in SoHo at Whatever Tattoo II where he had the sugar skull added. I'll be frank, I thought that the design was just a Day of the Dead piece and only recently learned of the significance of the sugar skull. These items are usually associated with the Mexican Day of the Dead holiday, and are made specifically for the ocasion using colored sugar. In the context of the tattoo they represent the dichotomy of life and death. This tattoo is only about two weeks old.

Omar says he plans to have a full sleeve dedicated to traditional tattoo symbols. He next hopes to add to the background of the skull with some flowers and other designs.

Thanks to Omar for his contribution to Tattoosday!
Posted by Tattoosday at 5:49 AM