Tattoos I Know: Paul Part 2, or, The Traditional Japanese Sleeve

NOTE: This post was updated on March 31, 2008 with three additional photographs.

Here's a Tattoosday first: a repeat subject in this blog's history.

Paul appeared here first, showing off his first tattoo, a dragon. In this post, Paul returns, showing off a full sleeve on his left arm.

The sleeve consists of traditional elements: there is a dragon, a lotus, a mask, a lily, and a koi.

If you went back in a time machine 8 or 9 years to visit Paul's arm, you would have seen a grim reaper holding a skull on the bicep: 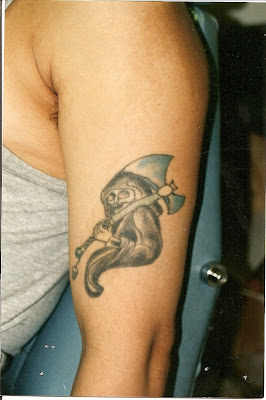 and some roses in a pattern on the forearm. These earlier tattoos have been covered by elements in the sleeve. Even when told where the original ink lies, it's extremely difficult to see the previous work.

So I will break this down into two sections: the upper arm and the lower arm.

The upper arm began with the dragon cover-up: 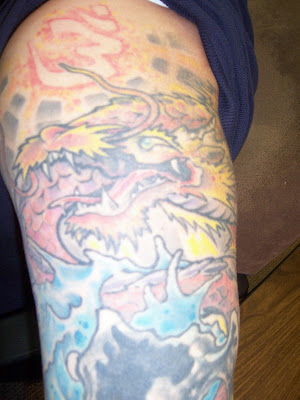 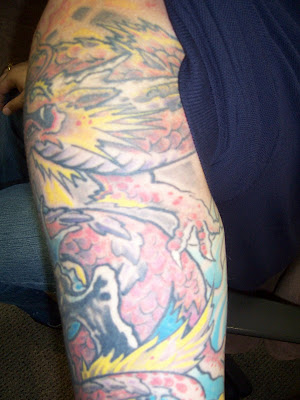 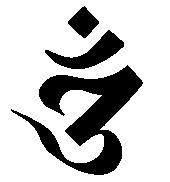 The dark rock below the dragon covered the old piece. This design, which included the aum or om symbol at the top of the arm, was inked by Carlos at Rising Dragon Tattoos in Chelsea back in 2001. The aum symbol is the Siddhaṃ script version and is a mystical and sacred symbol in Indian religions. Note that this om is different than the one that appeare din the first Tattoosday post here.

Paul was not 100% thrilled with the dragon, so when he decided to finish the sleeve, the following year, he went elsewhere.

The lower part of the arm, which is the more prominent part of the sleeve, was inked by Mike Bellamy at Red Rocket Tattoo in Manhattan, although at the time his shop was known as Triple X Tattoo.

The specific elements in the sleeve are all traditional irezumi, or Japanese tattooing, elements. 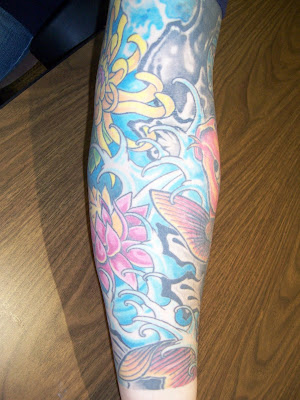 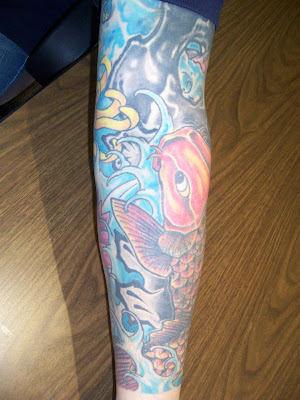 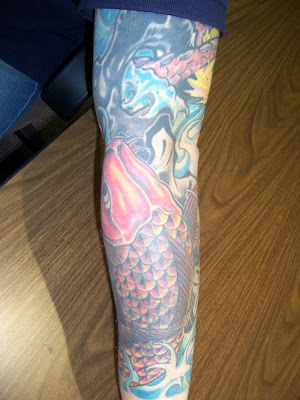 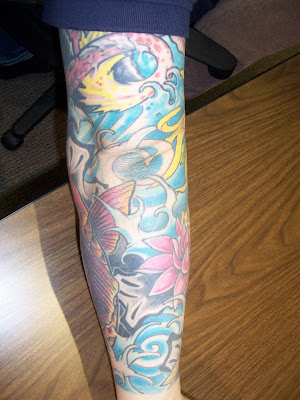 The largest piece is the koi. It appears to be a golden koi. 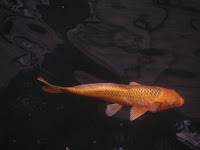 There's a whole discussion here on what koi tattoos symbolize.

In addition, one can read here about the symbolic nature of the lotus flower in tattoos. 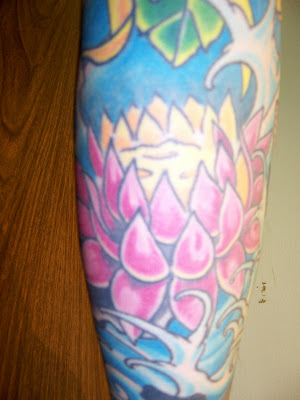 Paul also referred to the other flower as a spider lily. 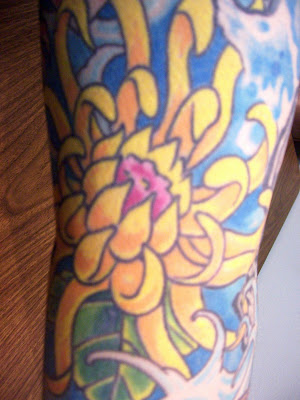 However, there are so many different varieties of specific families of flowers, that I often have a hard time finding good pictures to represent the tattoos.

The additional element in the sleeve which is only a small part, but is still interesting is what Paul referred to as the "kite mask": 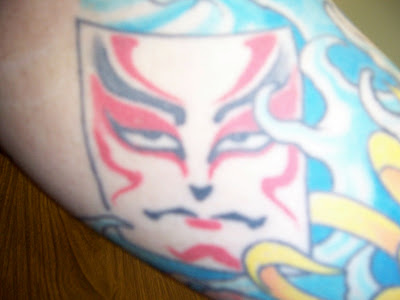 Masks are traditional parts of Japanese tattoo design, but this specific one is hard to pinpoint for me. Here are some Chinese mask kites. Yet, the fact that I cannot easily find one on the web, just fascinates me more. 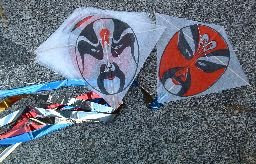 Paul sent me the following photos from the New York City Tattoo Convention, where Mike Bellamy did some of the work on Paul's sleeve: 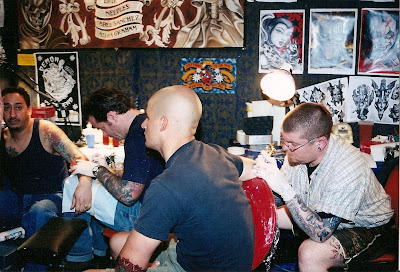 That's Paul and Mike on the far left of the photo: 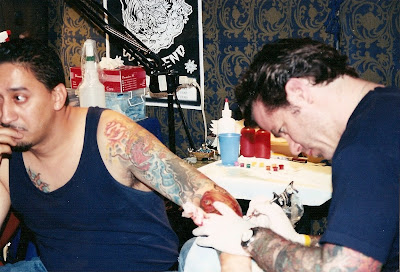 Thanks to Paul for helping me update this post with additional shots!
Posted by Tattoosday at 7:13 PM